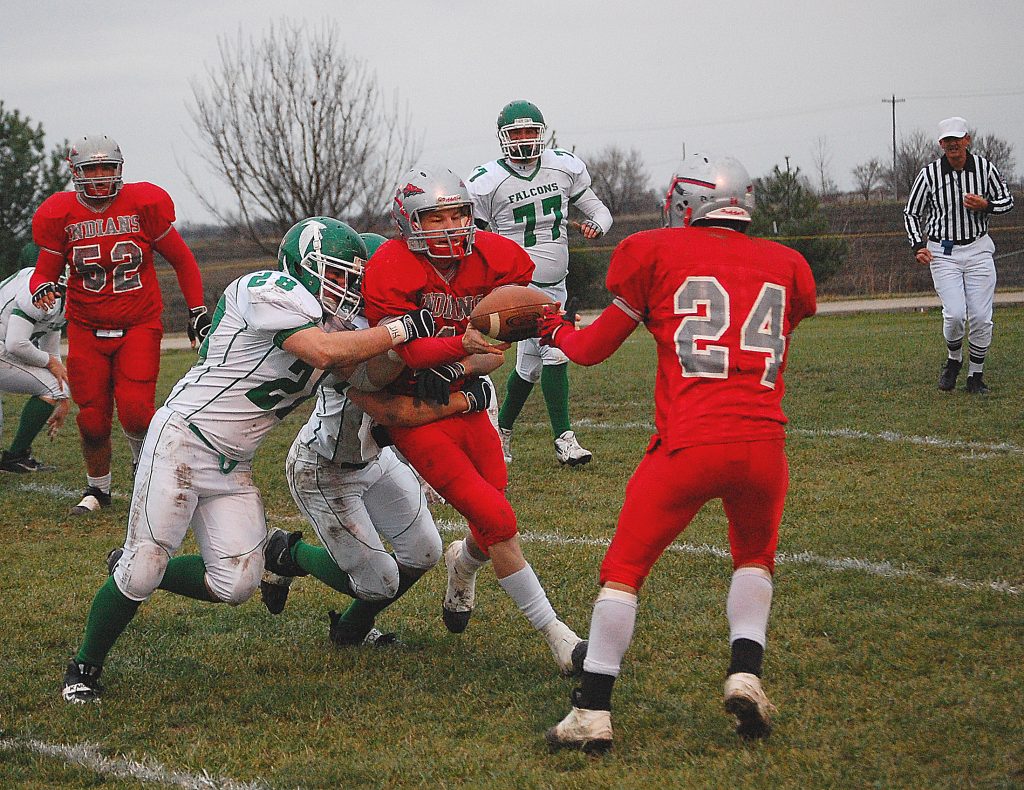 The 2008 Clark County Indians are taking a step into school history, becoming the first team to reach the state-semifinals. The Indians fought their way through a nail-biting final quarter to hold on to a 19-18 win over the Blair Oaks Falcons on Saturday afternoon.

Throughout the game, a stiff crosswind blew across the field, and snow showers occasionally dusted the crowd as the temperatures fell from the 30’s into the 20’s.

Clark County won the opening toss, and received the kickoff. They picked up a quick first down on an Ethan Allen pass to Bryan Plenge, and then Javis Vineyard got around the Falcon line and ripped 66 yard to score. Kolt Kiger’s extra-point kick was good, and the Indians took a 7-0 lead less than a minute into the contest.

Blair Oak’s powerful offense was shut down on their first possession, as Matt Morrow picked off a third and ten Justin Eiken pass and returned the ball to the Falcon 22 yard line.

Both teams have had exceptional defense all year, and this game was no exception. The teams traded possession twice in the course of the first quarter. With just 45 seconds left, Vineyard fielded a Falcon punt and returned the ball to the 44-yard line. Two plays later, Vineyard scored his second TD, going 43 yards to the end zone. The wind pushed Kiger’s kick to the right, and the Indians held a 13-0 lead with 30 seconds left in the first quarter.

Blair Oaks bounced right back, and the Falcons drove the ball 64 yards against the Indians to get on the scoreboard. Eiken scored on a 26-yard rune with 7:52 on the clock in the second quarter. A two-point conversion attempt after a bad snap failed, and Clark County led 13-6.

On their next possession, the Indians still couldn’t move the ball, and after the punt, Blair Oaks got the ball on their own 18. In another impressive drive, the Falcons moved the ball to the Clark County 24-yard line before Bryan Plenge intercepted a pass in the end zone to get the ball back with 2:35 left in the half.

Ethan Allen ran out to the 40-yard line for an Indian first down, but the Indians were again forced to punt the ball away before halftime.

Blair Oaks couldn’t capitalize on that opportunity, as Clark County picked off another pass before heading to the locker room with a13-6 lead at halftime.

The teams battled for ground yard throughout the third quarter. Blair Oaks moved the ball deep into Indian territory before two holding penalties force them to punt. The ball went into the end zone, and Clark County got possession on the 20-yard line with 22 seconds left in the quarter. Allen connected with Mason Owen on a short pass to the sideline, but there were no Falcon defenders between Owen and the goal line as he race 80-yards for another Indian touchdown. This time, Kiger’s kick was blocked, and Clark County took a 19-6 lead with just 12 seconds left in the third quarter.

Defense seemed to dominate the first two possessions of the final quarter, as both teams were forced to punt. The Indian’s punt was into the wind, and Blair Oaks got the ball on the 40 with about ten minutes left to play. After gaining two first downs, the Falcons scored with 7:21 on the clock. Their extra point attempt missed, and Clark County held on to a 19-12 lead.

The Indians started their next possession on the 11-yard line, but they couldn’t get the ball moving. One of many controversial penalty calls was an illegal forward pass called against Allen as he tossed the ball to Vineyard as he was being tackled. With 4th down and six, the Indians attempted to draw Blair Oaks offside, but a miscommunication on the snap led to the Indians turning the ball over on downs on their own four yard line.

Blair Oaks pounded the Indian line, and Eiken scored on a one-yard run with 5:32 remaining. The extra point missed, and Clark County held on to a narrow 19-18 lead.

Javis Vineyard fielded the opening kickoff, and returned the ball to the 28-yard line. The Indians used the clock and controlled the football in the final minutes, picking up some very crucial first downs, including a 4th down and inches conversion with 2:04 left in the game. The Indians drove the ball to the Falcon 23 yard line before time ran out, earning Clark County its first trip to the final four next Saturday.

Javis Vineyard had 25 carries for 189 yard and two touchdowns to lead the Indians. Allen was 8 of 15 in passing, for 150 yard and one TD pass to Mason Owen.

“This was a big win for our team, and we made it a little harder than it had to be,” Coach Matt Smith told KMEM radio. “It’s probably good that we won this way. Fighting through adversity will make us a better team.”

The Indians will take on the number one ranked Maplewood-Richmond Heights Blue Devils on Saturday, November 22, at 1:30 PM.