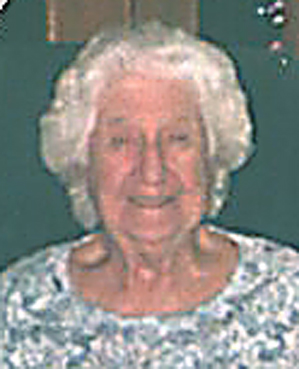 Marguerite L. Gregory, age 88, of Kahoka, MO, formerly of Alexandria, died Thursday, January 22, 2009, at Lexington Square in Keokuk, IA, where she had been a resident the past 9 days.

She was born August 31, 1920, in Baring, MO, a daughter of Stephen and Edith Mitten Mayer.

On May 22, 1940, she was united in marriage to Albert Leroy Gregory in Wayland. He preceded her in death on April 2, 1990.
Survivors include four sons: Gary Gregory and his wife, Joan, and Tom Gregory, all of Hamilton, IL; Jerry Gregory and his wife, Joni, of Springfield, MO, and Kevin Gregory and his wife, Lori, of Montrose, IA; one daughter, Patricia Ann Gregory, of Kahoka, MO; daughter-in-law, Connie Gregory of rural Alexandria, MO; two brothers, Steve “Jr.” Mayer of Unionville, MO and Paul “Bud” Mayer and his wife, Ruth, of Kirksville, MO; three sisters: Elizabeth Menke and her husband, Ed, of Fort Madison, IA, and Norma Mayer and Janet Moore, both of Baring, MO; a dear friend who was very special to her, Randy Malone, of Kahoka, MO; fourteen grandchildren; thirty great-grandchildren; two great-great grandchildren; and, two foster grandsons.

She was preceded in death by her parents; her husband; a son, Donald Gregory; a daughter-in-law, Sheila Gregory; a great-grandchild, Keanna Carter; and, sisters, Geneva Henthorn and Phyllis Mayer.

Marguerite was raised and attended school in Baring. Her family moved to Clark County in 1936. She and Leroy made their home in or near Alexandria. During the flood of 1993 she moved to Kahoka. She was a true homemaker, who enjoyed cooking for her family and friends, doing laundry for others for a number of years and cleaning homes. She was a member of the St. Francisville United Methodist Church. She loved to garden, can meats and vegetables, look for bargains at yard sales and play cards and bingo. She will be most remembered for her sweet spirit, her love of life, sense of humor and smile that was usually accompanied by laughter.

Funeral services were held Sunday, January 25, 2009, at 2 p.m. at Wilson Funeral Home in Kahoka with Pastor Tim Smith officiating. Cheryl Brammer was pianist and Christa and Caleb Smith, vocalists. Special music was “Amazing Grace” and “In the Garden”.

Visitation was held at Wilson Funeral Home after noon on Saturday with family receiving friends from 6-8 p.m.

Memorials were suggested to the Alexandria Community Center or the Clark Co. Ambulance District.