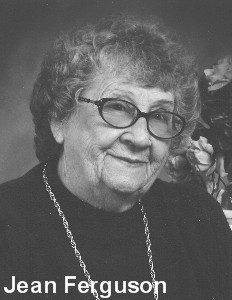 Jean began working at the age of 16 at
Flora Thumb’s Restaurant in Niota, IL.
She then worked at the Ordnance Plant in Middletown, IA and also at
Kavanaugh’s gas station in Alexandria, MO.
She and her husband Paul farmed
together and also owned and operated Ferguson’s Market in Wayland, MO.

She was a member of the First Baptist
Church in Wayland, MO.

Jean enjoyed sewing, cooking, watching
racing, reading the Bible, going for rides in the car and going out to
eat.  She was a devoted mother and
grandmother and loved spending time with her family.  Her grandchildren were her pride and joy.

She was also preceded in death by her
son, Gary McKeown, five brothers and six sisters.

Funeral services will be held at 11 a.m.,
Tuesday at the Vigen Memorial Home in Keokuk, IA with Pastor Dan Deatrick
officiating.  Burial will be in the
Keokuk National Cemetery.

Visitation will be held on Tuesday at the
funeral home from 9 a.m. until time of service with the family meeting with
friends at that time.

Memorials may be made to the First Baptist
Church of Wayland, MO.