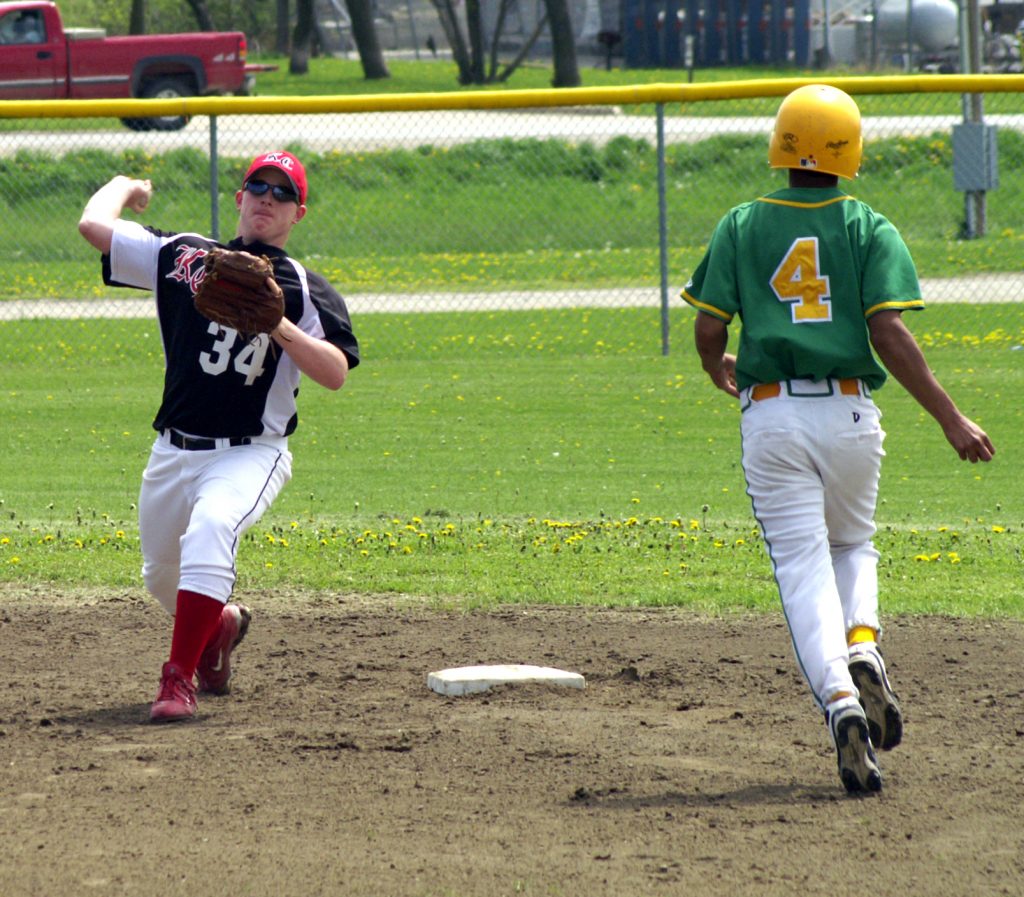 By David Sharp
Two run home runs by Milan’s Bryce Richardson and Matt Coon provided the difference on the scoreboard in a hard fought 5-0 Milan win over Knox County in May 2 Tri-Rivers Conference baseball action at Milan.
Knox County pitcher Parker Dixson and Wildcat hurler Bryce Richardson hooked up in a pitcher’s duel.
Richardson fanned 11 Eagles while Dixson struck out four batters in six innings of work. Both hurlers went the distance for their respective teams. Both teams played well defensively. Milan (6-1, 2-0) did not make an error during the contest.
Milan made the most of their scoring chances. Two of the five Milan scoring runners reached base as the result of a pair of Eagle infield errors.
“Good pitching can stymie good hitting,” said Milan coach John Dabney.
“We were able to put the bat on the ball. There were two really good pitching performances today. Bryce Richardson is having such an outstanding year. He was able to fight off a good pitch, and one hand it over the fence.”
Knox County (1-9, 0-3) was not able to put the ball in play often enough to beat a good team. Milan’s only loss of the season was to sixth ranked LaPlata.
Solid KC defensive play prevented the Wildcats from taking advantage of Cody Peterie’s leadoff hit in the first inning. Matt Coon doubled with two out in the Milan second inning.
Parker Dixson fanned two Milan batters before Kyle May-Rolley drilled an RBI single, scoring Coon for the games’ first run in the second inning.
Matthew McCarty threw May-Rolley out at second base when the Milan runner tried to stretch the single. The second inning ended with Milan on top by a run.
Juan Carlos Estrada reached on an error leading off the Wildcat third inning. Cody Peterie grounded into a fielder’s choice for the first out. Bryce Richardson homered over the fence, putting Milan on top of a 3-0 score.
Dylan Morgret and Brett Bryant walked in the KCHS fourth inning, putting Eagles on first and second base with two out. Logan Hill fielded Matthew McCarty’s sharp grounder for the final out.  Parker Dixson set the Wildcats down in order in the fourth. Milan led 3-0.
Knox County mounted a two out threat in the top of the fifth. Lance McMahon walked. Brett Wilkerson was hit by a pitch. Bryce Richardson pitched out of the jam, striking out a batter to end the inning.
Parker Dixson pitched around two fifth inning hits. Kyle May-Rolley singled to lead off the bottom half of inning five. Parker Dixson picked the runner off first base, with Cody Goodwin applying the tag. Goodwin fielded a grounder for the second out of the inning.
The Knox County defensive plays paid off when Cody Peterie stroked a two out Milan single. Brett Bryant fielded a grounder for the final out. The Eagles threatened again in the sixth inning.
Dylan Morgret drew a leadoff walk. Parker Dixson drilled a long fly ball to the center field fence for the first out. Brett Bryant broke up Bryce Richardson’s no hit bid with a one out single. Logan Hill climbed the fence, robbing Matthew McCarty of an RBI chance with a great catch of a foul fly for the second out.
The next batter fanned, leaving men on first and third base. Knox County stranded seven men on the day. Cooper Bankus reached on a two out error in the Milan sixth inning. Matt Coon followed with a home run over the fence for a 5-0 Milan lead.
Cody Goodwin led off the KCHS seventh inning with a base hit. The next batter struck out. The next two men flew out to right field, ending the game with Milan taking the 5-0 victory.
Milan scored five runs on seven hits with no errors and two stranded. Bryce Richardson was the winning pitcher, striking out 11 batters while walking five. Matt Coon was 2-3 with a two run homer and two Milan runs scored.
Knox County was blanked on two hits and two errors. Parker Dixson struck out four batters walked none while allowing seven hits in six innings pitched. Dylan Morgret, Brett Bryant, and Lance McMahon reached base during two of their three plate appearances.
Knox County has their final conference game of the season slated at Putnam County on May 4. The Eagles host Madison and Marion County on Thursday and Friday weather permitting.
“We are not producing with runners in scoring position,” commented Eagle coach Jesse Crawford. “We faced a good ball club. Bryce Richardson is a good pitcher. They are 6-1 for a reason. We just don’t execute. We are not playing small ball very well.”
“When you are 1-9, the breaks are obviously not falling your way. We had two balls a few feet from being home runs. Logan Hill made a great play on the fence when we had runners on first and third,” said Coach Crawford.
“We are eventually going to get the breaks. We have good talent; we are just not putting it together. Once we put it together, we will get some wins. Right now it’s frustrating for me, it’s frustrating for the kids. We are not going out and getting embarrassed.”
Four of the Eagle losses are by one run. “We are just trying to get better and get ready for the post season.”