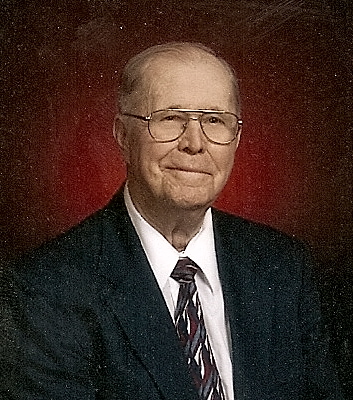 Mervyn C. Swanson 88, of Edina, Missouri, and formerly of Boxholm, and Stratford, Iowa, died Monday, July 13, 2009, at his home in Edina, Missouri.
Mervyn C. Swanson was born on December 1, 1920, in Boxholm, Iowa, the son of Herman and Ethel (Lingren) Swanson. He graduated with the Boxholm High School Class of 1938. Mervyn enlisted in the United States Army Air Corps in September of 1942, and attended Airplane Mechanic School at Shepard Field, Texas, and Chanute Field, Illinois, and went on to become Crew Chief on a B17 Bomber at Dyersburg, Tennessee, as rank of Staff Sgt. He was honorably discharged in February of 1946. Mervyn was united in marriage to Johnnye Palmer on February 18, 1945, at her parent’s home in Dyersburg. Mervyn and Johnnye lived in Halls, Tennessee for about one year. In 1947, the couple moved to a farm northwest of Boxholm, Iowa, where they established their home and farmed. They remained on the farm until moving to the Athen Woods Apartments in Stratford in June of 2001. Johnnye passed away on October 28, 2006. On November 23, 2007, Mervyn married Joann Folkerts and the couple made their home in Edina.
Mervyn received Christ as Savior at 30 years of age. He was a member of Calvary Baptist Church in Fort Dodge and First Baptist Church in Stratford and had served as a Deacon and Sunday School Teacher. His hobbies included working with Gideon’s International and camping. Mervyn and Johnnye also enjoyed traveling, and had spent 14 winters in Bibleville Alamo, Texas, where they were involved with Bible Conference and Mission work there and in Mexico. He belonged to Gideon’s International, American Legion and the Boone County Pork Producers Board.
Mervyn is survived by his wife, Joann Swanson of Edina, Missouri; a daughter, Susan and her husband, Jeff Snicale of White Bear Lake, Minnesota; a son, C. John and his wife, Susan Swanson of Boxholm, Iowa; five grandchildren, Ryan, Sara and Jonathan (Wendy) Snicale, Brooke Swanson, and Karen (Gabe) Olson; four great-grandchildren; a sister, Verlee and her husband Clair Hein of Waterloo, Iowa; and several nieces and nephews; He was preceded in death by his parents; first wife, Johnnye Swanson; and an infant brother.
Funeral services were held 2:30 p.m., Friday, July 17, 2009, at the First Baptist Church in Stratford. Pastor Mike Fendley officiated. Burial was at Lawn Cemetery in Boxholm. Military Graveside Rites were conducted by the Boone Veteran’s Council. Visitation was Thursday from 5:00 to 7:00 p.m., at Carson – Stapp Funeral Home in Dayton.
Memorials may be directed to the discretion of the family. Local memorials may be left at or mailed to the Hudson Rimer Funeral Home, P.O. Box 1, Edina, Missouri 63537.