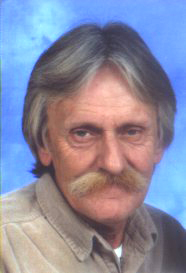 Robert J. “Bob” Morrison, age 57, of Kahoka, died Wednesday, July 22, 2009, at Blessing Hospital in Quincy, IL, after fighting a battle with cancer.
He was born July 20, 1952 in Muscatine, IA, a son of Raymond Cecil and Helen M. Felker Morrison.
On April 22, 1995, he was united in marriage to Carol Daniels.
Survivors include his wife, Carol, of Kahoka; three sons: Michael (Vickie) Brown of Michigan, Kyle Morrison of Michigan, Keane Morrison and fiancé, Kimberly Jenkins, of Kahoka; a step-son, Andy McVeigh of Kahoka; also, Kyle (Lindsey) Swindler of Kahoka whom he considered like a son; three daughters: Cristina Webber of Kirksville, MO, Myra Young Griffin of Kahoka, and Jessica Morrison of Kahoka; a step-daughter, Dana Summers of Luray; nine grandchildren: Ashley, C.J., Michael and Jarrod Brown, Tessa Young, Trenton and Hailee Summers, Kale Webber and Nick Boon; a great-grandchild, Grace Clark; four brothers: Charles (Barbara) Morrison of Dixon, IL, Larry (Sharon) Morrison of Peaksville, MO, Mike (Diane) Morrison of Kahoka, and Ronnie Morrison of Kahoka; four sisters: Linda (Dan) Riley of Jadwin, MO, Sandy Darnell of Stratford, MO, Deborah (Mark) Brammer of Wayland, and Patricia LaMaster of Kahoka; brothers-in-law and sisters-in-law: John Daniels of Tacoma, WA, Jim (Carole) Daniels of Keokuk, Roger (Francine) Daniels of Kahoka, Harold (Karen) Daniels of Keokuk, and Terry (Patty) Daniels of Keokuk, and Frances (Dean) Jackson of Burlington; as well as nieces, nephews, cousins and other relatives.
He was preceded in death by his parents; his mother-in-law, Ann Daniels; and brothers-in-law, Roger Darnell and Larry Daniels; and sister-in-law, Pat Morrison.
For most of his adult life, Bob was a construction worker and the past five years had worked for Hoppe and Sons Construction of Hamilton, IL. He loved carpentry work and loved to build things. He was also mechanically inclined and enjoyed tinkering, tearing things apart to see how they worked, and putting them back together only to make them even better. He loved his Mountain Dew and ice cream and had to have a milk shake every night. He also loved every Ford Ranger he had ever owned. He was a kid at heart which made his grandkids enjoy being with him as much as he enjoyed being with them.
Memorial services were held Saturday, July 25, 2009 at 2 p.m. at Wilson Funeral Home in Kahoka with Pastor Shawn McAfee officiating. Special music was recordings: “I Cross My Heart”, “Can’t Fight This Feeling”, Stairway To Heaven”, “Keep On Loving You”, “Tears in Heaven” and, “Time For Me to Fly”.
Honorary pallbearers were Dale Moss, Kevin Johnson, Jack Stotler, and Gary McMann.
Memorials in lieu of flowers were requested to the family.
On-line condolences may be expressed at www.timeformemory.com/wilsonfh.