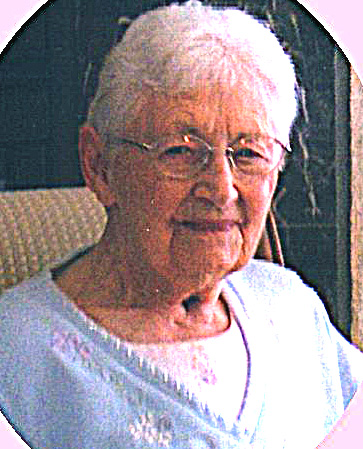 ENOLA MAE WELLS
Enola Mae Wells, age 92, of Kahoka, MO, died Friday, August 21, 2009, at the Clark Co. Nursing Home in Kahoka where she had been a resident the past 10 days.
Enola was born March 25, 1917 in the Ballard neighborhood of Clark County, MO, a daughter of Louis and Ida Brookhart Kapfer.
On December 26, 1940, she and Waldo F. Wells were united in marriage in Palmyra. Waldo preceded her in death on March 19, 2001.
Survivors include a son, William L. Wells and his wife, Connie, of Quincy, IL; two daughters, Phyllis A. Rice of Columbia, MO, and Ida Lou Ross and her husband, Larry, of Kahoka, MO; seven grandchildren and eighteen great grandchildren: Dr. William E. (Cynthia) Rice and children Allee Jo, Emily, and Daniel of Carl Junction, MO, Elizabeth (Tron) Jordheim and children Helena and Carolyn of Columbia, MO, Dr. Jeffrey M. Wells and son Wil of Palmyra, MO, Elaine (Michael) Fitzgerald and children Sophia and Kayla, of Bloomington, IL, James (Jennifer) Ross and children Will Brauns, Luke, Anna and Emma Ross, Kevin (Amanda) Ross and children Karlee, Jade, Hope and Kole, and, Carrie (Troy) Hamner and children Elana and Kaden, all of Kahoka, MO; as well as nieces and nephews and other relatives.
She was preceded in death by her parents; her husband; two brothers, Milton Kapfer in infancy and Verne and wife, Clara Kapfer; four sisters and husbands: Bessie and Byron Morrison, Elsie and Les Young, Arveta and Charles Alexander, and Ruth and Russell Young; and, one sister-in-law and husband, Hazel and Rollo Peters.
Enola earned her Bachelor of Science Degree in Education from Culver Stockton College. She taught in Jonesburg, MO, Wayland Elementary, Gravel Hill, and retired from Clark Co. R-1 Jr. High. She was a member of the Retired Teachers of Missouri and Clark Co. Retired Teachers.
She was a member of St. Paul United Church of Christ in Kahoka and had been active in the Afternoon Women’s Fellowship of the church. She had also been active in Chapter AW, P.E.O. Sisterhood, Wayland Extension Club, and the Clematis Garden Club.
Enola was a devoted daughter, wife and mother. She enjoyed gardening, needlework, playing cards and other games. She loved competition and played basketball in her early years.
She played piano and loved to sing, especially with her siblings, all who were talented in music. Although she was an avid St. Louis Cardinals fan, her greatest joy was her family, all of whom she cherished.  Enola and Waldo loved to travel, especially to the Rocky Mountains.
Funeral services were held Tuesday, August 25, 2009, at 10:30 a.m. at Wilson Funeral Home in Kahoka with The Rev. Kenneth Beckmann officiating. Mrs. Sandra Wisehart was pianist and Mrs. Ida Ross, accompanist. Special music “It is Well” was provided by Bill Wells and Phyllis Rice and “The Lord’s Prayer” by H L Plenge, with congregational benediction “Go Now in Peace”.
Serving as pallbearers were grandsons and grandsons-in-law: William Rice, Tron Jordheim, Jeffrey Wells, Michael Fitzgerald, James Ross, Kevin Ross, and Troy Hamner.
Burial will follow in the Kahoka Cemetery.
Visitation was held at Wilson Funeral Home after 9 a.m. Monday with family receiving friends from 6-8 p.m.
Memorials were suggested to the American Diabetes Association, Hancock Co. (Blessing) Hospice or St. Paul United Church of Christ in Kahoka.
On-line condolences may be expressed at www.timeformemory.com/wilsonfh.