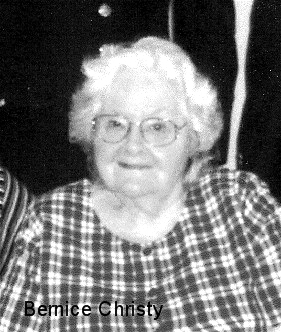 She had been employed at the Button Factory in Keokuk, IA.

She enjoyed crocheting and quilting.  She loved music and played the piano and mandolin.  Bernice was a loving mother, grandmother and
great-grandmother and cherished the times she spent with her family.

She was also preceded in death by one son, Leo Joe Christy,
one daughter, Holly Christy, one grandson, Joseph Christy, and two sisters,
Ruby LaFever and Garnet Holland.

A memorial service will be held at a later date.