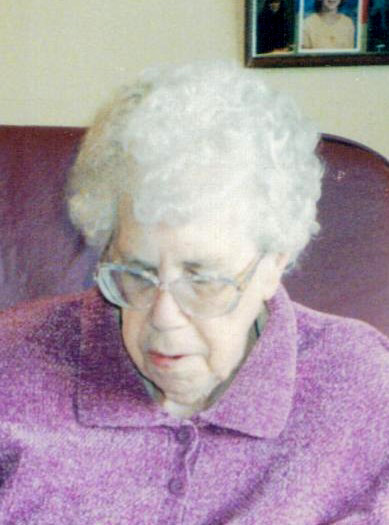 She was born on March 27, 1929 in
Williamstown, MO the daughter of Roy and Mary Coney Shoup. On December 21, 1942 Mary was united in
marriage to Raymond Glasgow in Kahoka, MO. To this union was born, one son, Don
Glasgow.

She was preceded in death by her husband
on March 29, 1992, her parents, four brothers, one sister, one step-son, one
step-daughter, two step-grandsons and a great granddaughter.

Mary Louise lived most of her life with
her husband Raymond around the Williamstown, MO area, where they farmed until
they retired and moved to Wyaconda, MO.
After Raymond’s death she moved to Kahoka, Mo then to Ft. Madison, IA
and later to the Montrose Health Center in Montrose, IA.

She was a great wife, mother,
mother-in-law and grandma. She especially enjoyed spoiling her grandchildren.

Thanks for all the great memories,
stories read to us, and your peanut butter and oatmeal cookies. We’ll do our
best to carry on with your tradition and think of you often. Mary will be missed by all who knew her.

Her body has been cremated and the family
will have a private graveside service at a later date in the Neeper Cemetery,
Neeper, MO.

In lieu of flowers please make memorials
to P.A.W.S.

Online condolences may be made to the
family at www.vigenmemoiralhome.com.

The Vigen Memorial Home in Kahoka, MO is in
charge of arrangements.