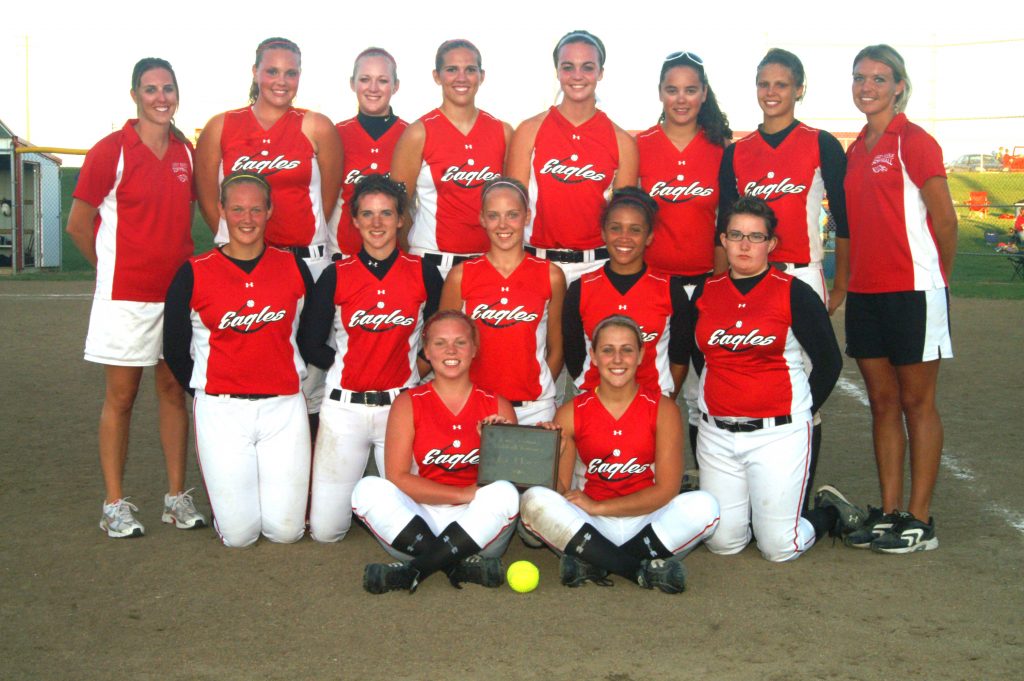 By David Sharp
Knox County battled their way through arguably the toughest side of the bracket to win the September 4, 2010 Knox County Varsity Softball Tournament. The Lady Eagles (5-0) came from three runs down to beat Canton (2-6) by a final score of 8-3 in the first round.
The Lady Eagles topped defending champion Kirksville JV by a 7-2 final. Devin Gudehus hit a two run homer and Hannah Dale blasted a home run, keying a 5-0 victory over Scotland County (4-3) in the championship game.
Both circuit clouts cleared the left field fence at the Knox County Softball/Baseball Complex.
Rachel Poston (5-0) earned the four hit shutout in the title game, striking out six batters. Poston pitched all but one KC tournament inning. Olivia Nichols finished the Kirksville game with one inning of shutout softball.
“I give total credit to our opponents. They are all good teams,” Knox County coach Marcie Stansberry told the Edina Sentinel after the tournament championship game.
“We battled through it. This team can go really far. We are making a statement. We are going to do the best we can this season,” Stansberry said.
“This team has chemistry and faith in each other. We played great defense today. Rachel (Poston) pitched three great games. Olivia Nichols came in when we needed her and got the job done.”
Marcie Stansberry was part of the last Lady Eagle team to win their own tournament in 2002. “It’s an awesome feeling. It just takes me back,” the current Lady Eagle head coach said.
“I’m glad to see the same smiling faces and to see (the players) enjoying the same feeling I once did. It’s nice to be on this side of the line and to have (the championship trophy) in my hands again.”
The Kirksville JV (5-1) powered past Marion County (0-4) by an 18-1 four inning margin, capturing third place. Canton (3-8) defeated South Shelby (0-5) by an 8-3 final score in the consolation championship game.
Scotland County bested South Shelby 6-3 in the first round. The Lady Tigers powered past Marion County by a 12-2 margin in the championship semi-final round.
Please see complete game stories of all three Lady Eagle Knox County Tournament games in this, or a future edition of the Edina Sentinel.