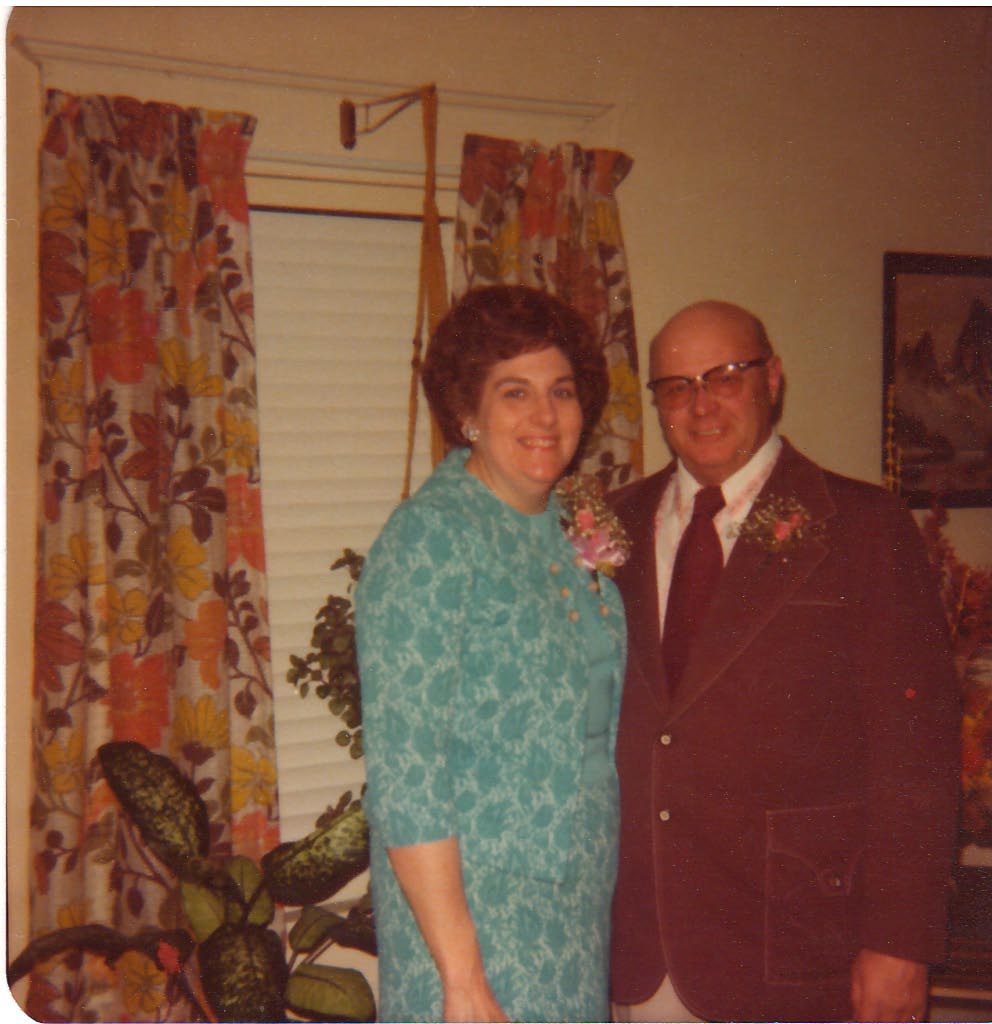 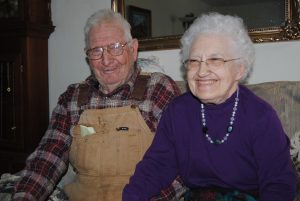 Ruth was born on October 14, 1927 at her grandparents’ home in Knox City to Fred and Ida Oldfather. She grew up in Knox County and graduated from the Novelty High School before going on to the Missouri State Teachers College, which is now known as Truman State University.

The couple met after they graduated from high school by way of a blind date set up by two of their friends. That first date was to see a movie at the Kennedy Theater in Kirksville.

“Now I have to think back. I would have been 18 and he was probably 19,” said Ruth. “It took him three years to get up enough nerve to ask me to get married.” 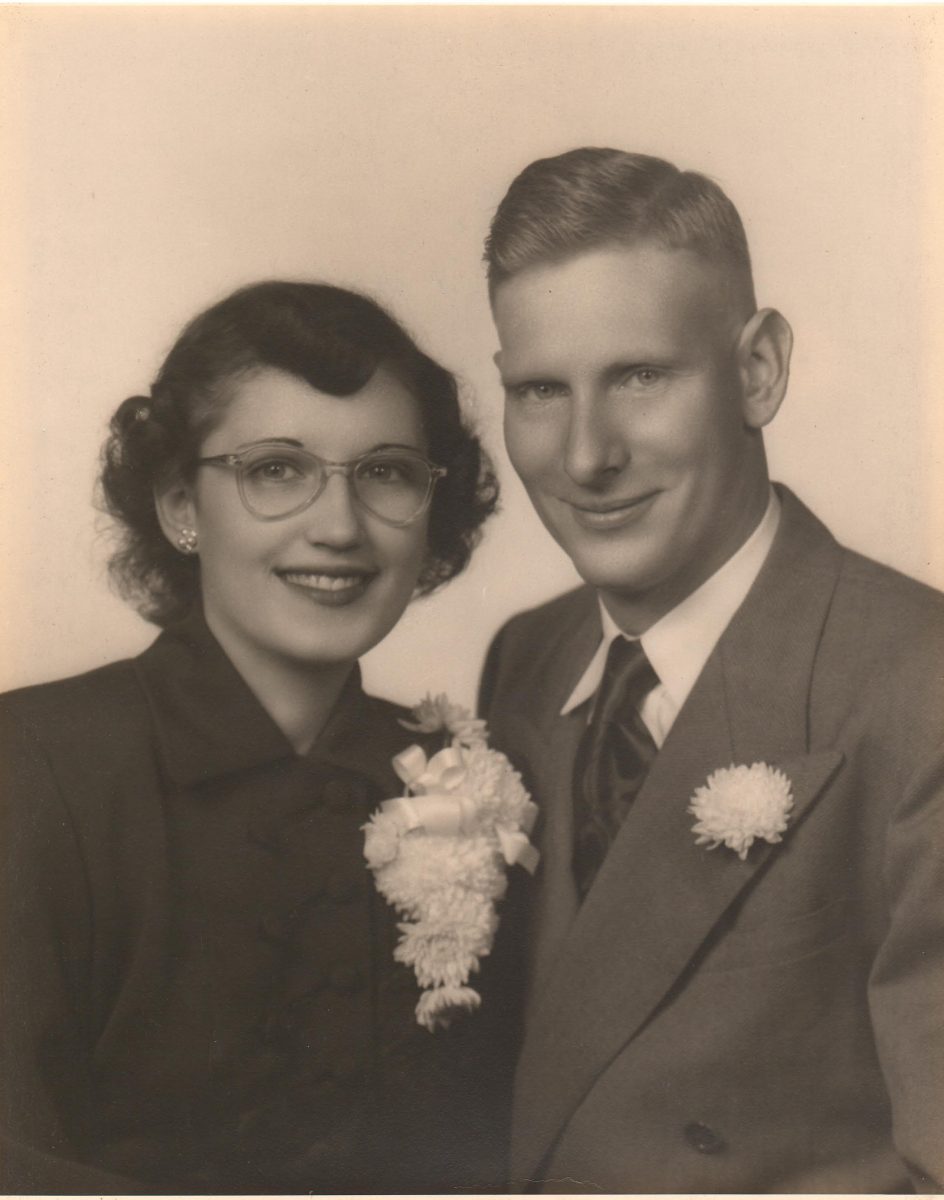 Two months after Vernon proposed the two married at a little church in Quincy on Vernon’s 24th birthday, October 24, 1950, and were married by the same minister who married Ruth’s parents. Standing up for them were Vernon’s brother, Harry, and Mabel Freese.

Right after the two were married they moved to Ridgeway, MO, where Ruth took a job teaching Home Economics and Vernon took a job as a mechanic at Anderson’s Garage.

“We slept on the floor when we first got married,” said Ruth.

“Her darn brothers stole our bed slats,” said Vernon. “If you wanna know the truth about it.”

The couple eventually relocated to Ruth’s grandparent’s home in Knox City. Their daughter, Sherrie Beth, came along in 1954.

Over the years Vernon has worked as a mechanic and a long haul truck driver and Ruth has been a teacher. The couple also ran a dog kennel operation in Edina for a very long time.

“She did that before we got married so we just kept on goin’ with it,” said Vernon. “That’s how she put herself through college. We’ve raised dogs ever since we got married.”

Vernon and Ruth have two grandsons, Jason and Curtis.

After more than six decades of marriage the couple says their secret to such a long lasting relationship is, “loving God and each other and laughing often,” said Ruth. 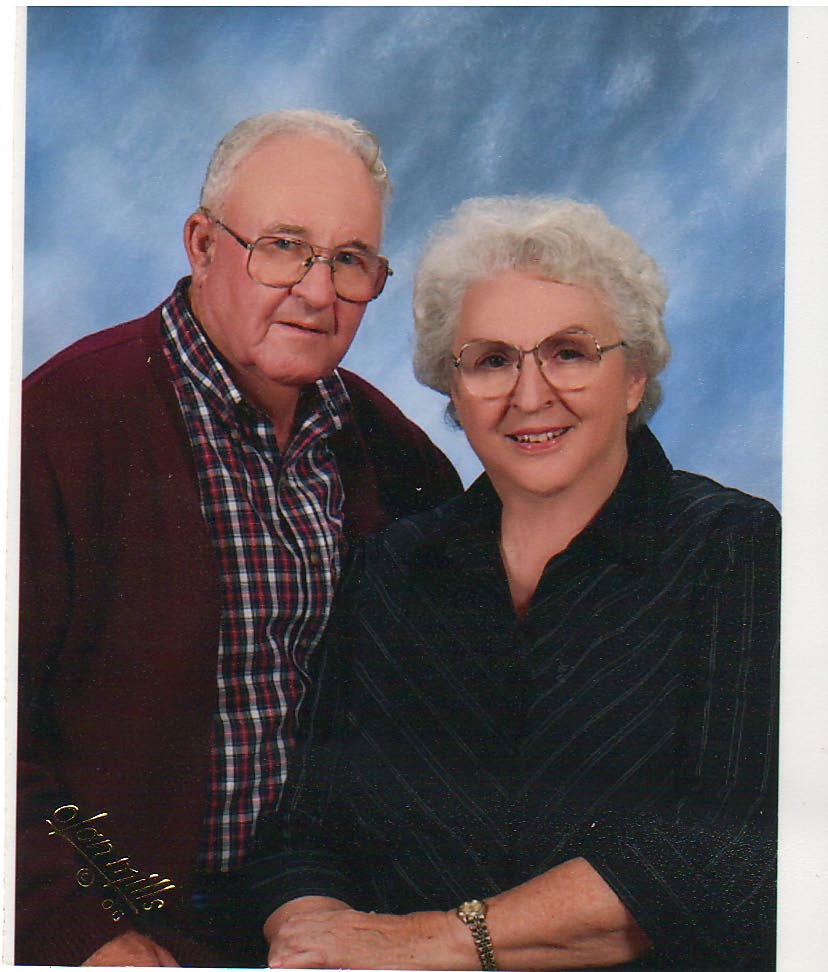 Kenneth was born on April 25, 1930 to Clayton and Theresa Goodwin of rural Edina. He attended several country schools and graduated from St. Joseph’s in Edina.

Marilyn was born on June 10, 1937 to Harold and Dorothy Lawson of Baring. She graduated from Baring High School and went on to graduate from Truman State University.

On their first date Kenneth picked Marilyn up from Baring and took her back to school in Kirksville and the two went to the movies.

“I have five younger brothers and sisters and that was hilarious,” laughed Marilyn. “And it was snowing and it turned into this terrible blizzard. He just plowed on through. When we came out of the movies his car was just covered with snow. He had to get out and dig out the lights. It’s a wonder he ever came back. Then he dropped me off and had a flat tire on the way home. But he came back the next weekend and we went on another date.” 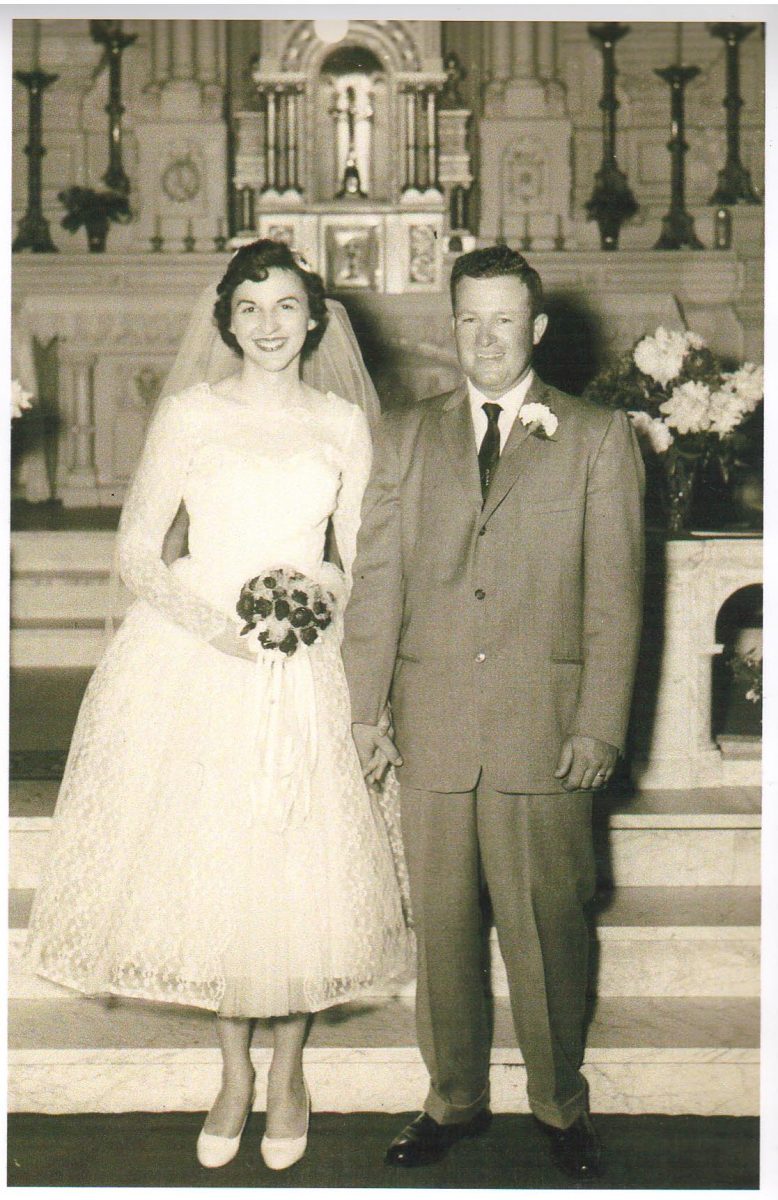 After two dates they were engaged to be married and just over a year later, on May 31, 1958, they married at St. Joseph’s Church. Father Mullins presided over the ceremony and Marilyn’s sister, Barbara, and Bobbie Cahalan stood up for them.

“He was 28 and I was 20 at the time,” said Marilyn. “We rented farm ground for a few years and then bought a place. We established a cattle herd and for many years we had a furrow to finish hog operation.”

After they got married Kenneth began farming and Marilyn taught at the Novelty school until the schools consolidated and she became the school librarian at the Knox County High school and eventually the Knox County Librarian.

They have two grandchildren, Mitchel and Abby Bohon.

After five and a half decades of marriage Goodwin’s secret to a long lasting relationship is, “being helpful, supportive of each other and being able to cooperate,” said Marilyn. 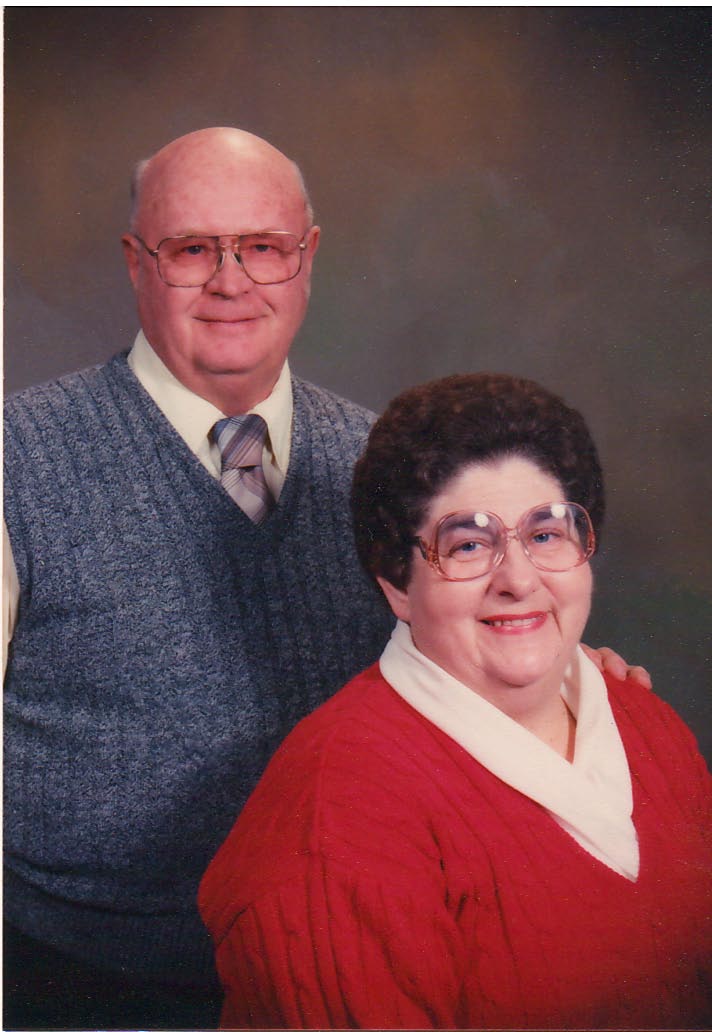 Bob was born on January 17, 1926, to Carl and Hallie Glasgow of Gorin. He grew up in the Gorin/Rutledge area on a farm and went to the school in Millport.

Evelyn was born on January 10, 1933, to Merrill and Bernice Ingold of Wyaconda. She graduated from the Wyaconda High School.

Bob and Evelyn are special because they have found long lasting relationships twice.

Before they met and married each other they were married to other people for many years.

“He had three children, two sons and a daughter, by his first wife and I had one daughter by my first husband and the children are all practically the same age,” said Evelyn. “We had a little group called Parents Without Partners and we had little get togethers at people’s houses.”

“After we decided to get married we went out and picked out the ring,” said Evelyn.

Bob and Evelyn were married at the First Christian Church in Kirksville on April 5, 1977. Ralph and Louise House stood up for them. 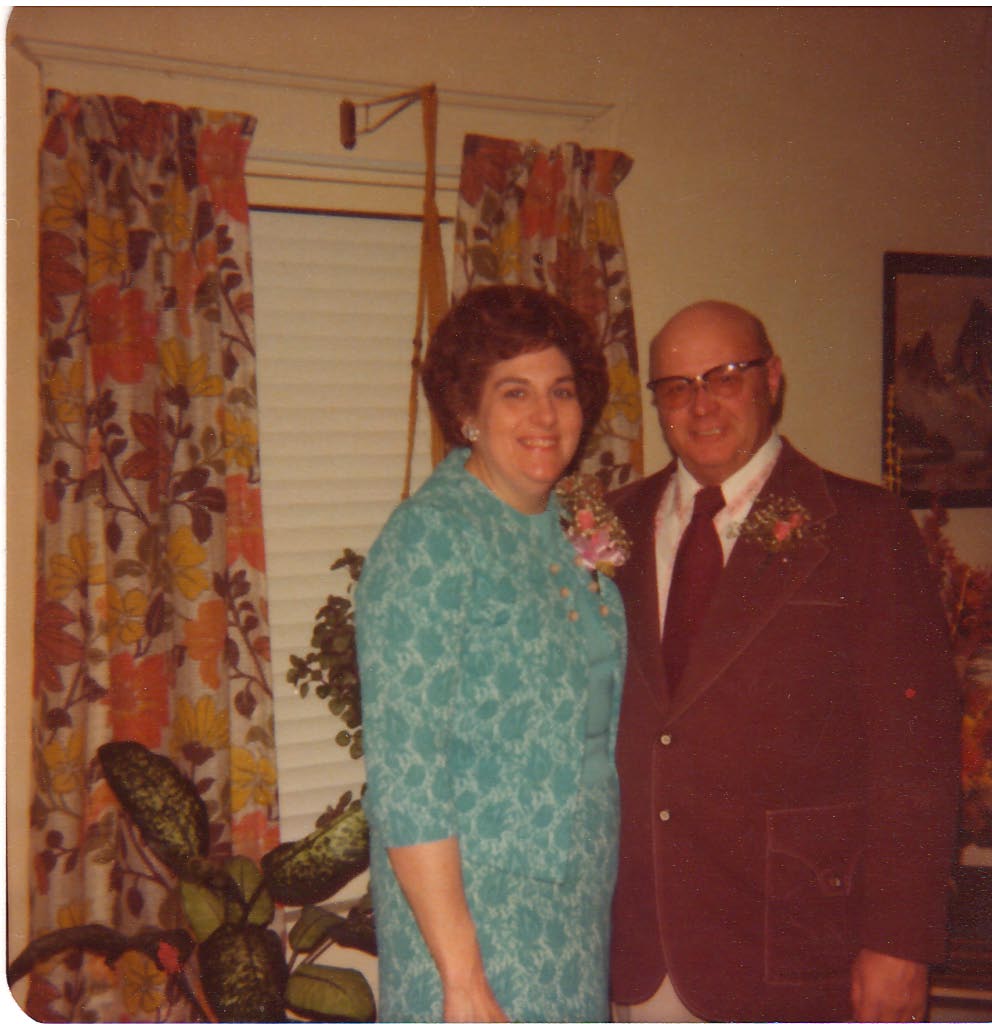 “There’s little funny things that happened. I worked at the bank in Kirksville and the bank people wanted to shivery us,” said Evelyn. “They came and took us uptown on the square. They had Bob push me around the square in a wheel barrel.”

They didn’t take their honeymoon until the following fall.

“We had a little old camper on the back end of a old pickup truck,” said Evelyn. “We pulled into a camp ground pretty late in Shyanne, Wyoming, and when we woke up the next morning we saw there was a hog lot right next to us.”

Bob owned Glasgow Implement and after they were married Evelyn quit at the bank and started keeping the books for him. The couple worked together until they sold the business.

“And we farmed,” said Evelyn. “Every night after work we would come home and do the farm work.”

After over three and a half decades of marriage their secret to such along lasting relationship is, “We have a lot of the same values. We grew up under most of the same circumstances. We’ve always tried to be saving. We enjoy the same things, which helps too. We always laugh,” said Evelyn.