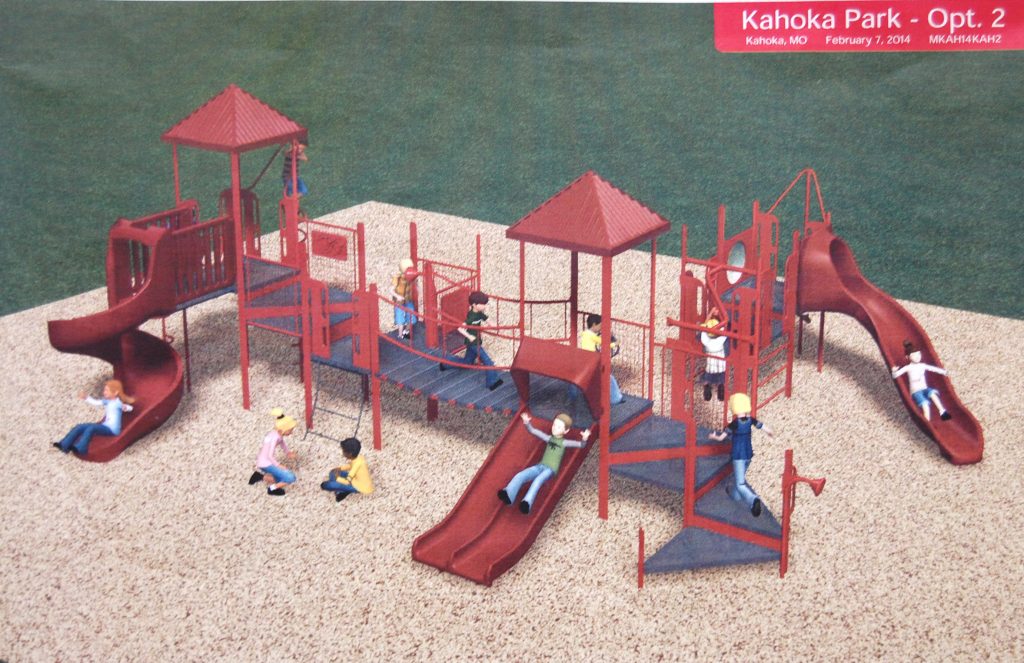 Kahoka’s City Park, located on the square in Kahoka, is getting a major face lift this spring, thanks to the combined efforts of the Clark County Health Department and the City of Kahoka.

Three years ago, the Clark County Health Department was awarded a $265,576 Healthy and Active Communities Grant from the Missouri Foundation For Health to improve sidewalks in Kahoka.

Some of the sidewalk projects taken on by the CCHD so far include the new sidewalks on Main Street from Johnson Street to the High School, on Vine Street out to the ballfields, and one block of Commercial off the square, then north one block to the Middle School.  The CCHD grant also paid from the patio and sidewalks at the ballfield, in cooperation with the CCR-1 School District.

“The grant has to be used on sidewalks,” said Renee Kirchner, Public Health Nurse and Grant Coordinator.

“We tried to tie in to the MoDOT Safe Routes to School grant,” added Public Health Nurse Hailey Davidson.

“This is the third and final year of the grant, and we had just a little money left to finish,” added Davidson.

Several months ago, Davidson and Kirchner approached the City of Kahoka about partnering to improve the city park, and the council agreed to work with the CCHD.

“The City Park needs help,” said Davidson.  “And we really wanted to do something for kids.  We said we’ll do th sidewalks you buy the new equipment, and the city was happy to work with us.”

The plan which developed calls for the city to purchase $25,000 of new playground equipment to replace the slide and monkey bars currently in the park.

“The slide is outdated, and the money bars are dangerous,” said Kirchner.

The city is also responsible for removing the existing sidewalks, which cross the park.

The CCHD will replace those sidewalks, along with installing a large concrete pad north of the grandstand, which will double as a patio or basketball court.

“It will give some of the older kids something to do, too,” Kirchner said. 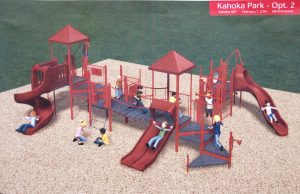 An artist’s concept of the new playground equipment to be installed in the City Park.

Sidewalk removal started on Wednesday, May 7.

The new playground equipment has already arrived in Kahoka and will be installed by city workers when the site is ready.

The new playground area measures 47×39, and can be added onto later if additional money is available. The colors will be red and gray, keeping with Clark County’s colors.

Other improvements will include bandstand repairs and painting the current swings.

“Our goal is to increase physical activity and make it pleasing to the eye.  We want people to come and enjoy the park.’ Kirchner said.

“We hope to be finished before Flag Day,” said Kirchner.