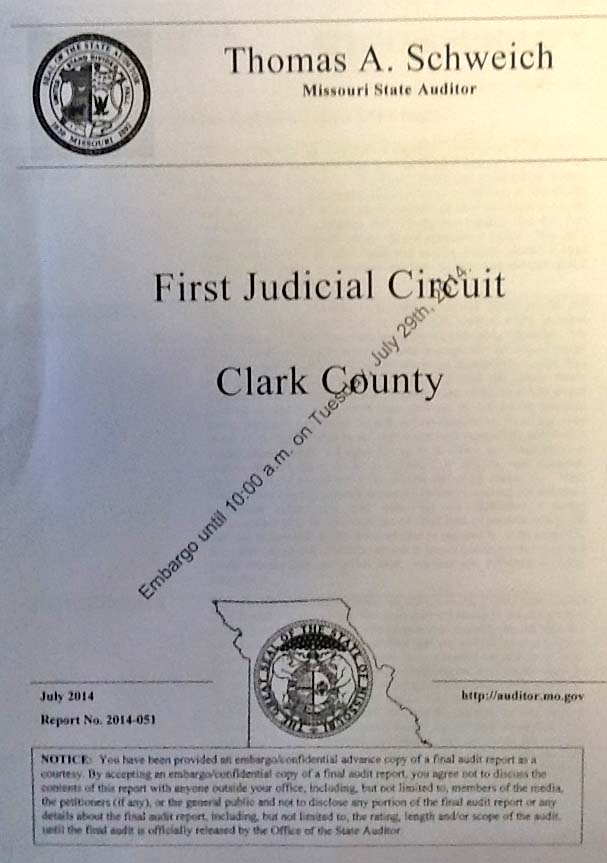 Missouri State Auditor Tom Schweich released the audit of the First Judicial Circuit Clark County this morning, just over a year since former Circuit Clerk Mary Jones was suspended and eventually resigned from office amid allegations of misconduct.  Jones currently faces two felony counts of stealing, and has a preliminary hearing in September.

“Embezzlement is on the rise, and public officials are embezzling at an alarming rate.  We’ve found embezzlement in 28 offices across the state, so you in Clark County are not alone,” Schweich told The Media in his first interview about the audit.

The audit covered the period of January 2012, through July of 2013, and revealed $3743 missing, plus another $750 which could be missing or was uncollected.  In addition, a least $7688 was not collected due to the non-assessment of fines and court costs, and the manipulation of case balances in the Justice Information System.  Misappropriated and missing court funds totaled at least $12,181.

“We spent over 1300 hours in this audit.  As far was we can tell, we only saw one person actually involved.  We saw a court that just trusted her, and that’s a common theme in more than two dozen other embezzlement cases from around the state.

We asked Schweich if there was any evidence of money missing in previous years.

“It’s impossible to say for sure,” he said, “But we think we got most of it.”

We asked Scheich if there was anything to indicate other staff was involved.

“No, not at this point,’ he answered.

The audit showed several instances where relatives or others with personal relationships with Jones had fines which were not collected, or had balances adjusted in the JIS system.

“It will be up to the prosecutor to determine if any corruption laws were violated,” Schweich said.

Other problems included unreasonable payment plans for individuals who owe the court money, or cases where no payment plan set up at all

“It’s very common to set up payment plans.  Sometimes the fines are quite hefty, and folks can’t pay it all at once,” Schweich said.

However, the audit revealed 199 cases with no payment plan in place, and 332 cases which had not been assessed time payment fees.  In addition, one case had two payment plans-the first for $50 per month until June, 2040, and the other for $15 per month until November of 2073.  That’s not a typo-it’s over 60 years to repay.

According to the audit report:

A review of 15 cases with balances due identified the following debt collection and payment plan problems:

The payment plans for 6 cases were not initiated timely, ranging from 2 to 8 years after disposition. Three of the 6 cases were never sent to debt collection. No additional collection efforts have been made for 8 of the cases reviewed. Also, 4 cases did not have a payment plan letter sent to the individual and 1 case file could not be located.

Because of the failure to attempt to collect fines owed the court, the court recently wrote off $125,000 as uncollectable.

Schweich’s report was very critical of the lack of accounting procedures in place within the Circuit Clerk’s Office.  Duties were not properly segregated, and the same person collected, recorded and deposited money without adequate oversight.

“The overriding issue is the lack of accounting controls.  It’s a red flag when one person handles all the money.  You have to watch out when there are large amounts of cash around,” Schweich added.  “There is no substitute for good accounting procedures”

Schweich did credit Judges Gary Dial and Rick Roberts for their cooperation in the audit and investigation.

“They said we have a problem, and we need to get to the bottom of it,” Schweich said.  “That hasn’t always been the case in other embezzlement cases.”

Court officials have responded to the audit findings, and have already implemented its recommendations.

For a more detailed look at this story, see next week’s issue of The Media.

To view the audit report, click the link below: 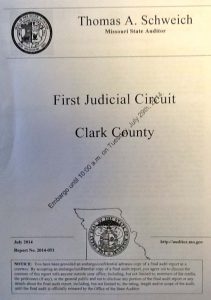