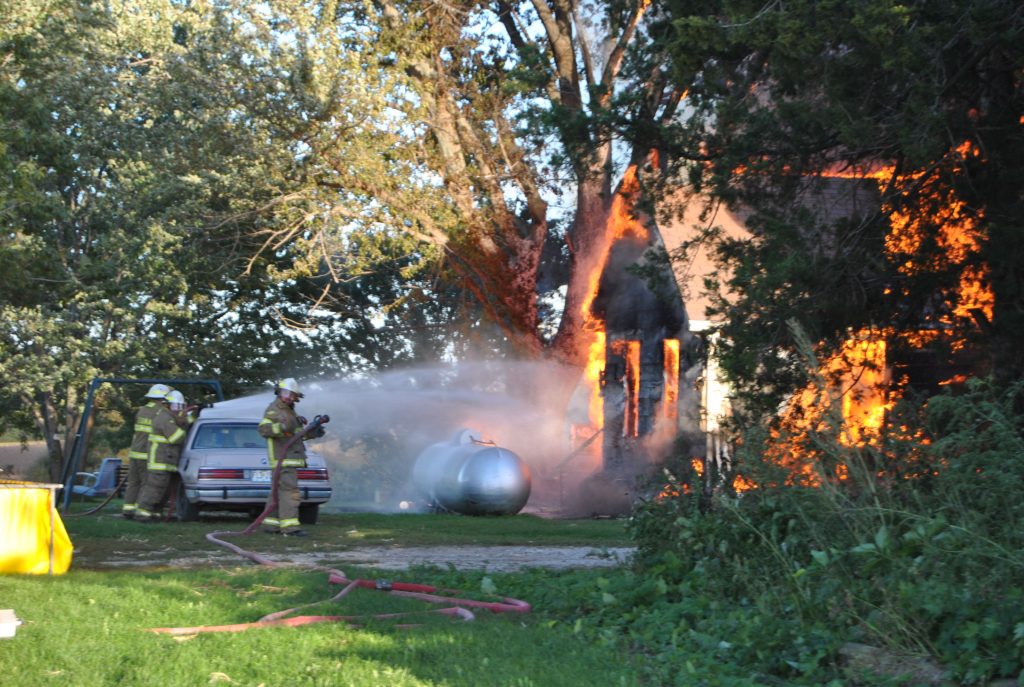 A Knox County home was destroyed by fire on Tuesday, October 7, 2014. Fire fighters were called to the home, located three miles west of Edina on Highway P, at approximately 5:30 p.m.

Volunteer firefighters from Edina and Baring fought heroically to keep water flowing on a nearby propane tank and onto the fire as flames tore through the home.

“We had a hard time getting the propane tank cooled down enough to get it shut off,” said Assistant Edina Fire Chief Tom Morgret.

According to the owner of the property, Paul Parsons, the propane tank caught fire twice during the firefight.

According to the residents of the home, Candy Garcia and her son Mitchell, they were able to escape the fire uninjured with their two dogs.

“The stove was either on fire or it started behind the stove. The fire extinguisher was right next to the stove and he wasn’t able to get to it,” said Morgret. “He was almost overcome by smoke while he was trying to make the call to 9-1-1.”

While the structure was burning several loud noises were heard coming from inside the residence. According to Morgret, several oxygen tanks and an oxygen machine were inside which could have contributed to how rapidly the structure became fully engulfed by flames.

“They had to come back to town to get more water and then set up a truck at the pond to suck water out of the pond,” said Morgret.

The structure was a total loss and by 7:00 p.m. it was reduced to a pile of debris.

According to Parsons, the home was built sometime between 1899 and 1901. He has no plans to rebuild.