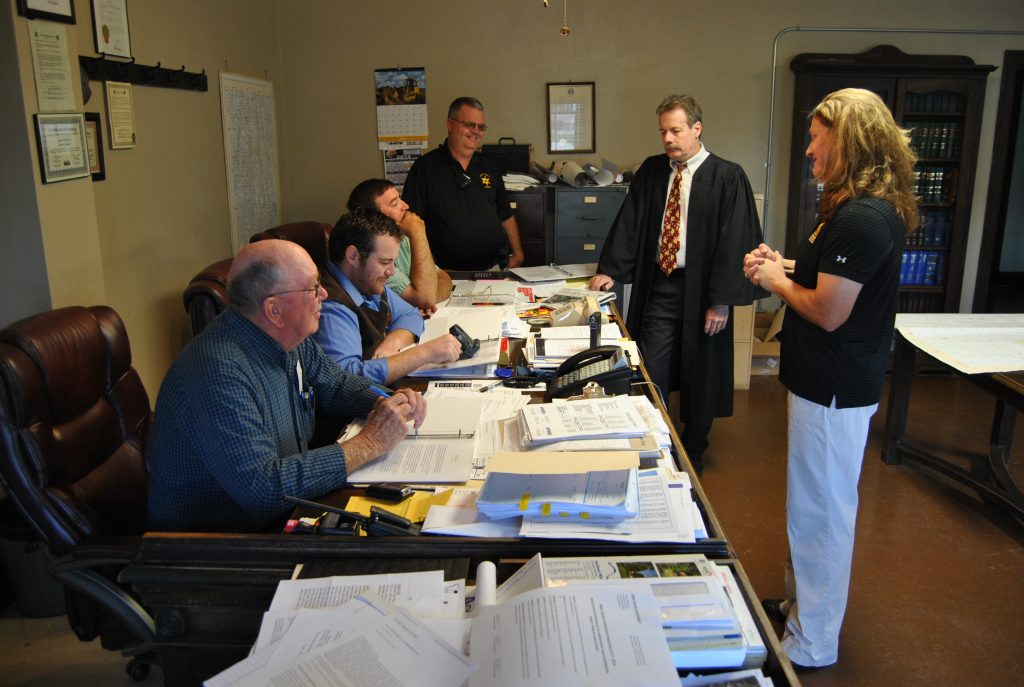 Mounting jail boarding bills have become cause for concern for the Knox County Commissioners over the past few months and as a result they are working together to address the issue.

For this year $15,000 was budgeted to board Knox County inmates in jails in other counties because Knox County does not have a jail of its own. So far the fees to house those inmates have exceeded the budgeted amount by over $3,000 and that figure grows every day that passes as long as Knox County inmates are in custody.

When someone is arrested in Knox County their jail boarding bill is automatically passed to the county, which, in turn, is paid by tax dollars. Inmate boarding bills vary, depending on the jail they are housed in. Knox County offenders and defendants are most often taken to the jails in Lewis and Adair Counties. The Lewis County Jail charges $33 per day to house an inmate. In Adair County the charge $35 per day.

The county is also responsible for paying any medical bills for an inmate while they are in custody.

The fees can add up quickly. For example if an inmate is kept in custody in the Lewis County Jail for 30 days the jail boarding bill alone would total $999.

On Friday, October 24, 2014, there were eight Knox County inmates being held in jail, three in Adair and five in Lewis. The county will be charged $270 for just the one day. If all eight inmates remained in jail for ten days the fees would jump to $2,700, not including any medical expenses.

According to Knox County Sheriff Allen Gudehus, there is also an expense for the fuel and labor cost of transporting defendants from jail to court hearings and back to jail. In many cases two Knox County deputies are required to transport prisoners. All this is coming at the expense of the tax payers.

Because of the mounting expenses the Knox County Commissioners, Sheriff and Associate Judge have taken a closer look at the house arrest program and monitoring select individuals electronically at the expense of the offender or defendant.

According to the commissioners the cost of being on house arrest is less than one third the cost of housing a prisoner in jail. Also, some of the money spent on the program will filter back into Knox County as Moore, the court liaison officer for E.T.I.S. responsible for monitoring individuals on house arrest locally, is a resident of Knox County and she would be the primary contact for the court system, local law enforcement and participants where house arrest in Knox County is concerned. Putting her to work in Knox County means money she earns from E.T.I.S. is an added perk to the county whereas dollars spent on jail boarding bills leave the county and don’t come back.

“On this system the offender (or defendant) is going to be footing the bill in order to stay out of jail, pursuant to the Judge’s orders obviously,” said Glasgow. “Even if the county had to pay the cost we would still be saving. It’s just an outstanding system all the way around. It won’t be used for everybody. Some people will have to stay in jail.”

“Judge Redington is on board with us too. That’s a big plus,” said Callahan.

“Judge Redington is more than willing to use it and he’s familiar with the system,” said Glasgow.

In fact, in 2013 Judge Redington, who was the Marion County Prosecutor at the time, tested a house arrest ankle monitor for one week and saw first had what it’s like to be monitored.

Knox County courts have had the option to use the house arrest program in the past, but haven’t. According to the Commissioners, that’s because it didn’t have the support of the Associate Circuit Judge. Now it does.

Judge Redington is the key piece of the puzzle because he decides if a defendant can be on house arrest or not. He’s the first judge a defendant sees when facing a criminal charge in Knox County. House arrest is court ordered, and the Judge decides the conditions of the agreement the defendant makes in order to participate in the program. County officials can push for the program until they are blue in the face, but it won’t make any difference if the Associate Circuit Judge is not on board.

According to Redington, people allowed to participate in the house arrest program will be considered on an individual case by case basis. Allowing people to leave jail and be placed on house arrest doesn’t mean they can just slap a bracelet on everyone in custody. There are people who will have to remain in jail and won’t be eligible for the program if things like public, victim and witness safety are a concern. Several things have to be taken into account, including the alleged crime, before he will allow someone to go on house arrest. Also, in order for an offender or defendant to remain out of jail the person would have to comply with all the conditions of the house arrest program.

When asked how soon he would be exercising the option to use the house arrest program Judge Redington replied, “Immediately.”

“I’m in favor of this. I think it’s a good way to protect the community and respect the rights of the individuals,” said Redington.

“Absolutely, I’m in favor of house arrest when it’s appropriate depending on the nature of the crime, the criminal history of the accused and the safety of the victims and citizens,” said Brown.