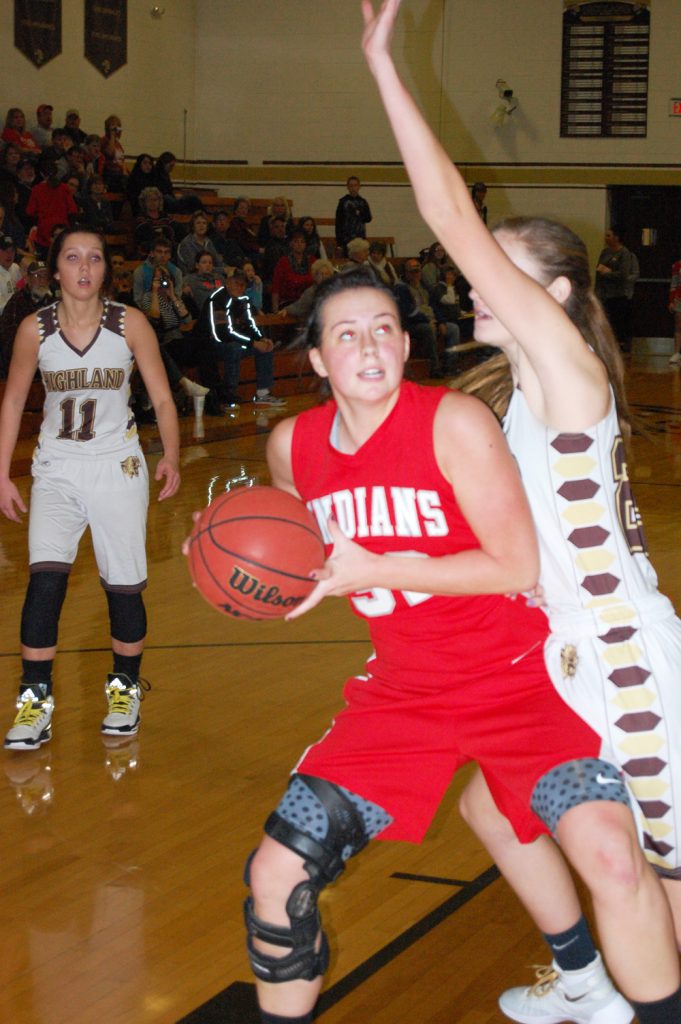 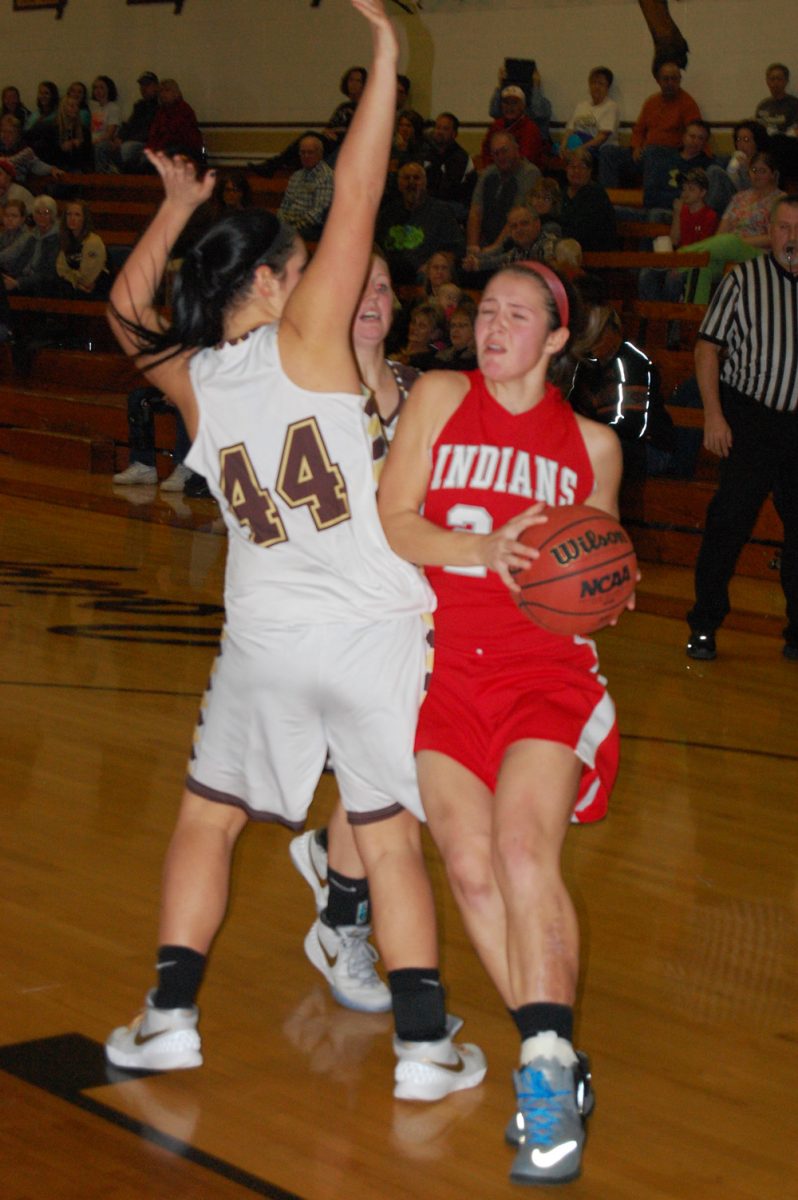 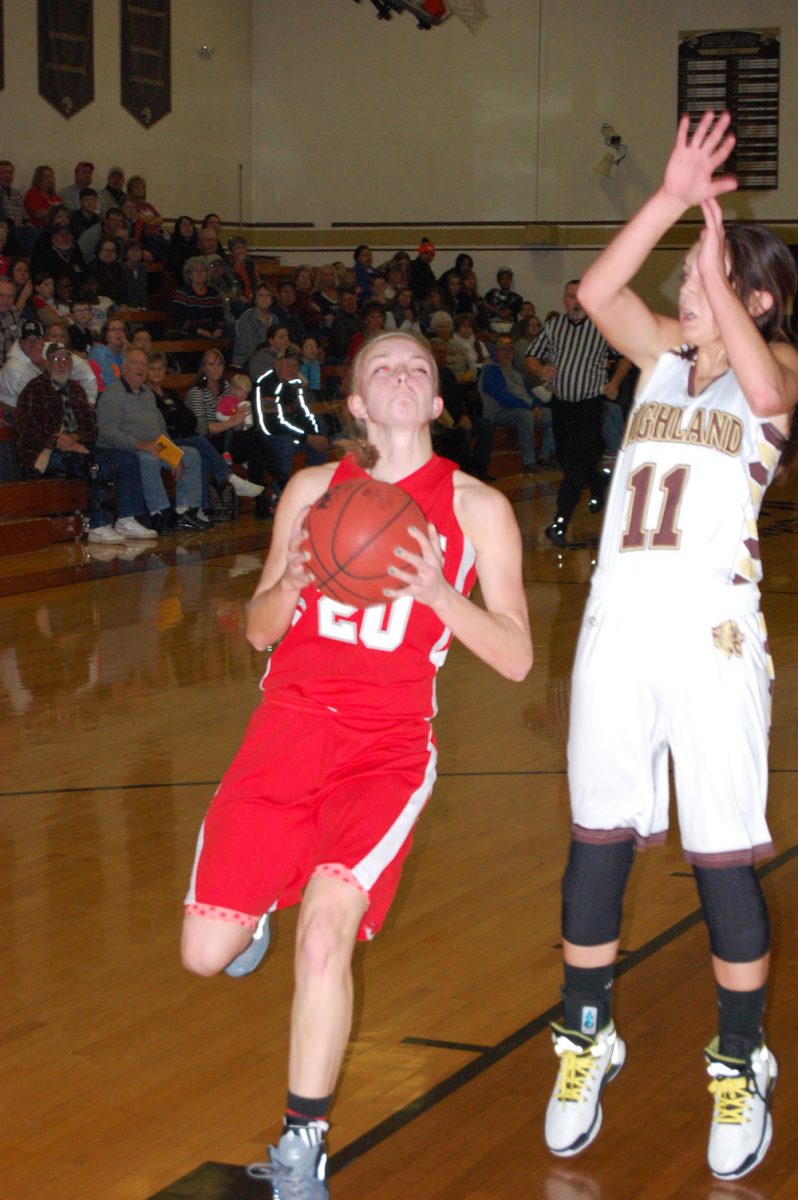 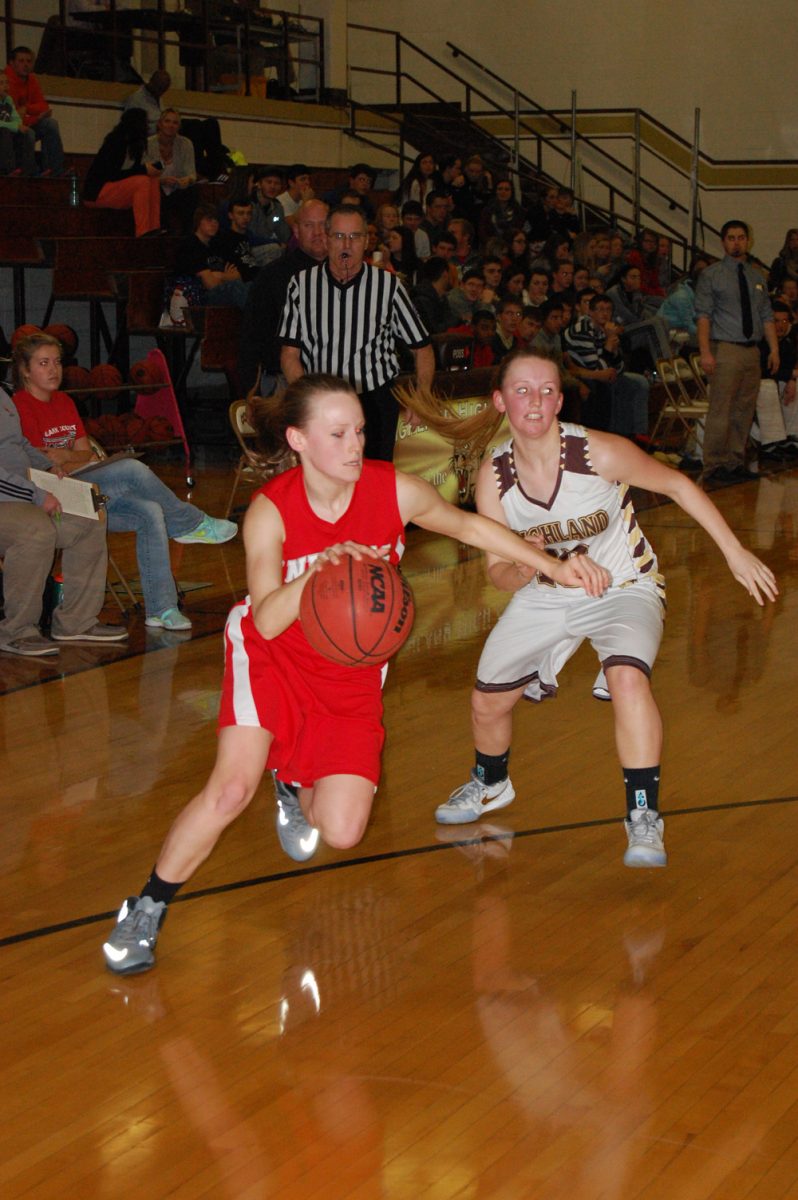 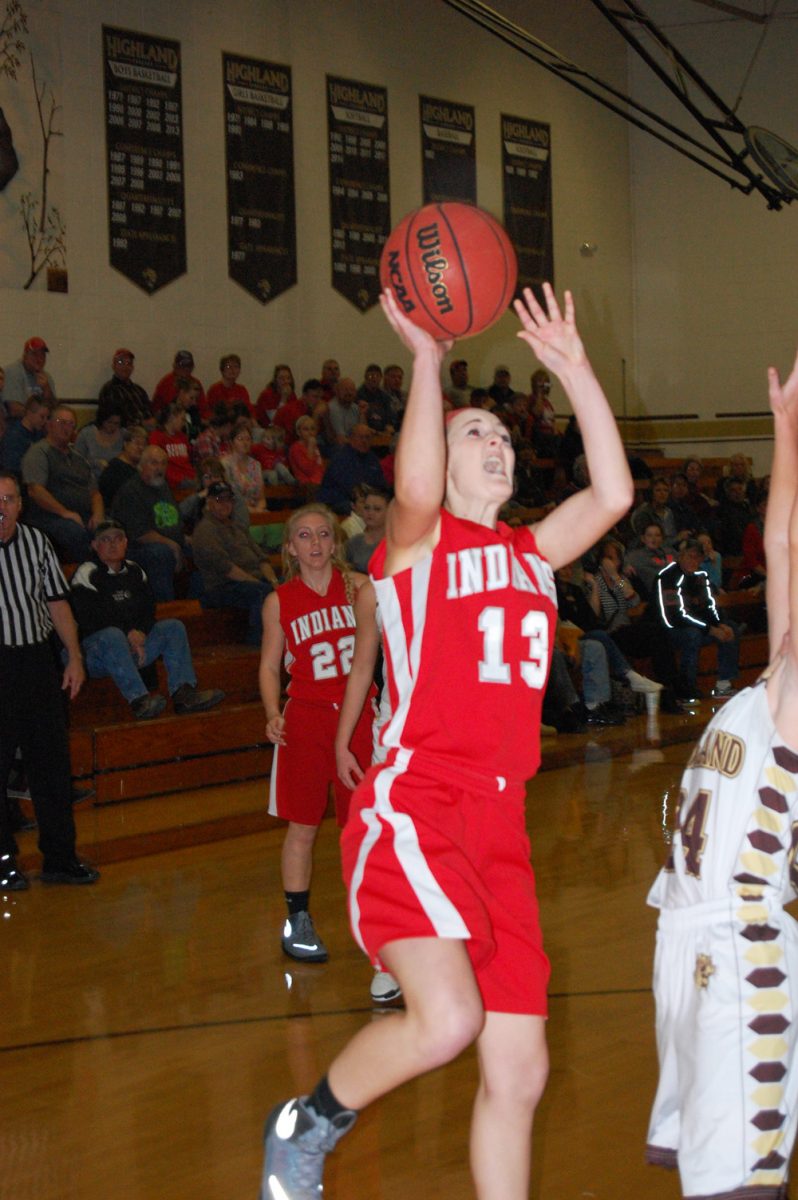 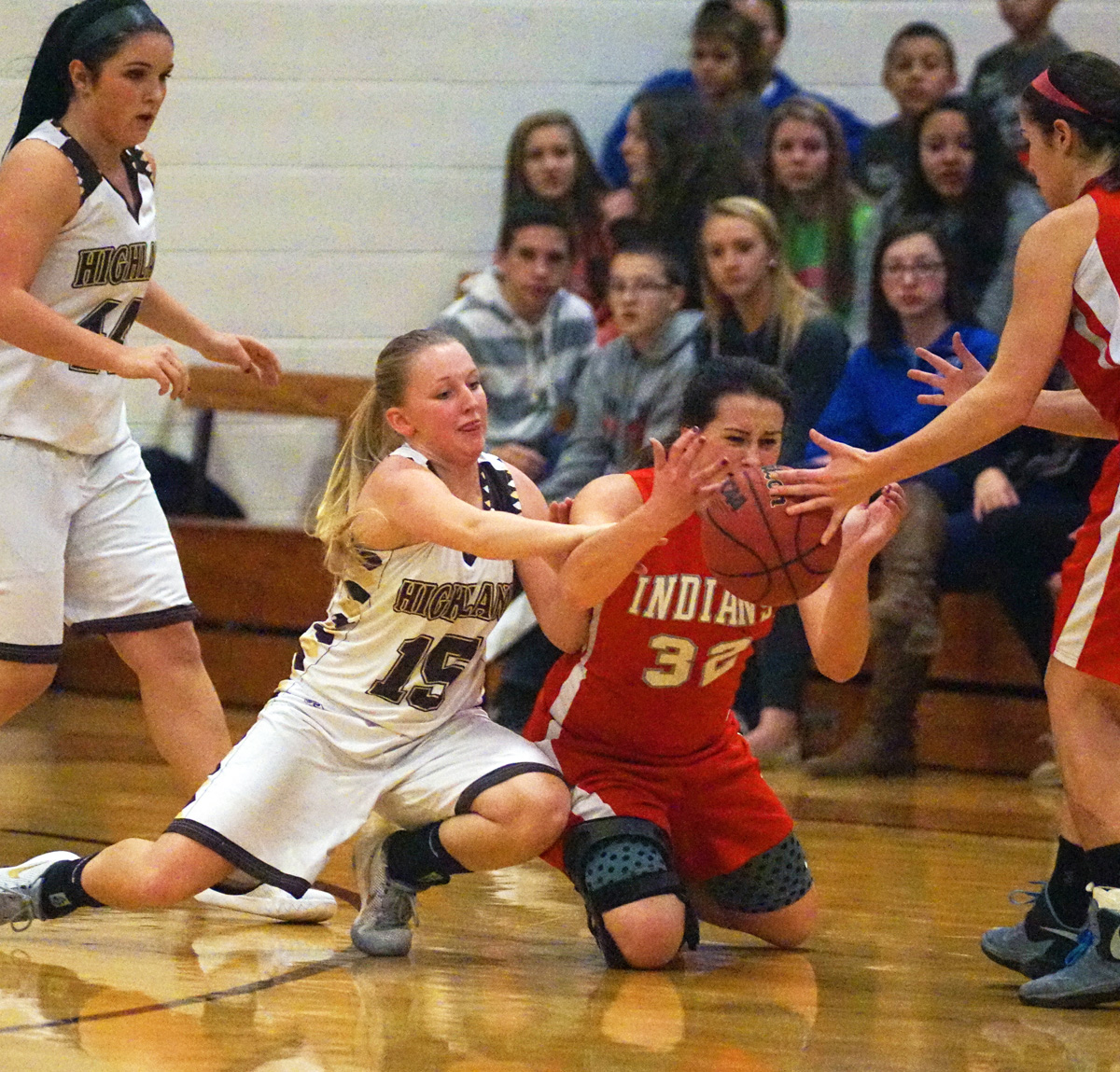 LADY INDIANS AND COUGARS BATTLE FOR FIRST ROUND SUPREMACY-Highland forward Autumn Florea (shown in white on the left) and Wednesday McCluskey battle for a loose ball during first round Highland Tournament girls action.
Wednesday McCluskey led all scorers with 19 points in a 42-32 Clark County win. Shown for Highland on the left is Madison Scott. Shown on the far right for Clark County is Carissa Bevans. 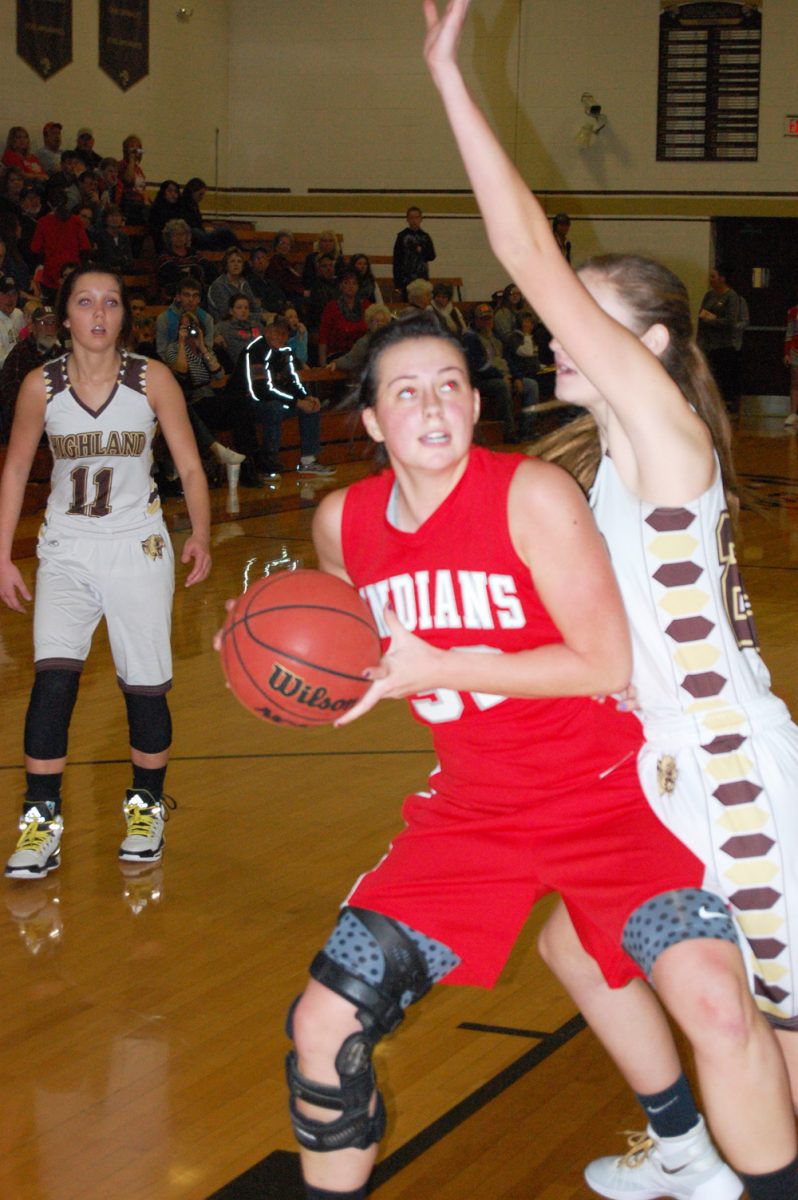 By David Sharp
Clark County collected points in the paint and hounded Highland (5-5) into turnovers during a 42-32 Lady Indian win in Highland Tournament girl’s first round play.
Wednesday McCluskey scored a game high 19 Clark County points. Anna Ross was next on the Lady Indian ledger with eight points. Kaitlin Benson and Madison Cottrell led Highland with nine points each.
Clark County (6-3) took a six point first quarter lead. Autumn Florea sank a Highland three ball; helping pull the Lady Cougars back within a 6-4 deficit after a quarter of basketball.
Highland got their share of steals (eight on the night) and chances to score. The Lady Cougars shot 33% from the field on the night and 20% from three point land.
“We were able to force them into some bad possessions,” Clark County coach John Weaver said.
“I thought the defense was the difference in the game. Wednesday McCluskey had a huge game for us. She scored almost half of our points.”
Wednesday McCluskey lit the fuse for a seven point Clark County run closing the first half. The Lady Indians held a 20-10 halftime advantage.
Amber Garner pulled Highland within five points with a deuce at the 4:40 mark of the third quarter.
Keeley O’Brien scored late in the period, keeping Clark County up 31-21 at the three quarter pole. Clark County wound up reeling off another 12-3 run to a 35-21 lead with seven minutes remaining in the contest.
Kaitlin Benson drained a pair of Highland home run balls in the final two minutes, pulling the Lady Cougars back within a 38-32 margin with 1:10 to play in the game.
Clark County finished scoring the final four points of the game, taking the 42-32 win. Tressa Campbell scored six Lady Indian points. Maggie Schutte and Keeley O’Brien scored four points each. Carissa Bevans added two Clark County points.
“We talk about the ends of quarters and the beginning of quarters, how important it is to make little runs,” John Weaver said. “Playing on their home court, we thought they would make a little run and they did in the last couple of minutes.”
“They gave us a scare. Keeley O’Brien hit a big lay up,” Coach Weaver said. “Wednesday McCluskey had a couple of big shots and free throws to keep that lead at ten. The pressure was on them all night to execute. We did a good job.”
Madison Cottrell had five rebounds to go with her nine Highland points. Amber Garner scored six points. Charnice Smith had a good floor game. Smith had five steals, five assists and five rebounds to go with her three points.
Autumn Florea scored three and Kennedy Flanagan added two points. “We pride our team in forcing more turnovers than the other team,” Highland coach Kyle Ellison said.
“We forced a lot of turnovers, but we also turned it over to them,” Coach Ellison said. “They were able to finish easy shots. We are not finishing those easy shots right now.”
“It’s frustrating. A lot of the shots our girls are taking aren’t hard shots,” Ellison said. “There has been a person in our face, and we just have to go up strong and finish it.”
“The difference is they kept the turnover battle close. When teams do that to us, we usually lose the game. The games we have won this season, we win the turnover battle by quite a lot.”
“I told the girls it is not a hard game,” Kyle Ellison said. “They make it harder than it has to be. When we take care of the ball, we make shots and we rebound we win the game.”
“I’m sure every coach says that,” Kyle Ellison said. “But it really is as simple as that.”
Clark County advanced to take on conference rival and top seeded Palmyra in the championship semi final round.
Highland played the Mexico JV after three time defending champion Palmyra blasted the Bulldogs 67-20 in first round action.
Posted in AREA SPORTS, Featured Stories