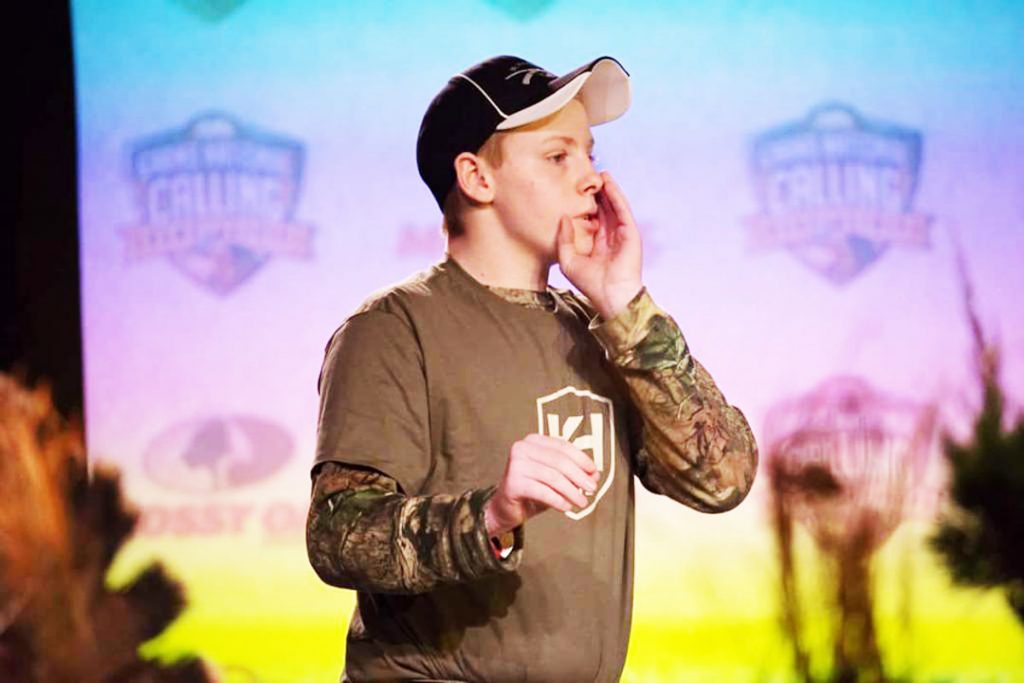 Nearly everyday we hear that the world isn’t what it once was and fear of what its future will be. If the world had more young people like Andrew Moore, those concerns would be unfounded. Andrew, is 14 years old and an 8th grader at CCR-1 recently placed 3rd in the Grand National Turkey Calling Contest at the National Wild Turkey Federation Convention February 11-14 in Nashville, Tennessee.

And while it’s a very interesting story and what we will be focusing on, it only makes up part of who and what this young man is. For five months Andrew was wheelchair bound and this was followed by very intense therapy. Andrew suffered with Legg Calves Perthes Disease. Perthes disease is a condition where the blood supply to the head of the thighbone, or femur, is intermittent. The head of the femur breaks down, but starts to regrow when the blood supply returns. The problem with this regrowth is that the head of the femur might no longer retain the ball shape that fits easily and comfortably into the hip joint. Because of this Andrew had to wear a brace on the outside of his leg that was attached to his hip while the regrowth occurred. To some this might have been enough to send them into despair, it made Andrew stronger as well as his faith. It also made him more determined to set goals for himself.

Andrew is an honor student who plans to go on to college where he plans to have a career in the outdoors, be it calling, or working with outdoor manufacturers or producers. I do not doubt for a minute that he will achieve those goals and more!

As far as Andrew and his turkey calling abilities, it came about in 2014 after a turkey hunt in Kansas. He explained, “There were so many toms and hens that it was amazing. The bad news was that I didn’t shoot very well and in fact missed a couple toms. The good news was that because I got to hunt longer, I got to hear all those birds calling, and the thought of being able to have a conversation with and call in a tom, just blew me away! So I have been running turkey calls since 2014 and competing since 2015. I had won a calling contest in Kirksville and one of the judges told me that I really needed to go the Grand Nationals. My next competition was at the Iowa State Championship, where I took 2nd Place.

You do not have to qualify for the Grand Nationals as a Junior, you just have to pre-register. There were 14 of us in the competition. The contest is something unreal because you’re calling in front of a lot of people and you’re on the same stage where the calling contests are held for all the other callers, so there are all kinds of props and stuffed turkeys as well as a big screen TV behind you that shows the callers on it while they are performing. I had been practicing to do a minute of calling for each of my calls, but the morning of the day we were to compete, we were told that the Junior class doesn’t have a time limit. The calls I did were a kee kee run, a cluck and purr, the cutting of an excited hen, and the yelp of a hen. I was really surprised by how well I did with my cutting because I normally do not do it as well, and I thought if I was going to mess up it would be with that call. On the other hand I was a little disappointed with my clucking and purring. I was number seven to compete and I was in another hall and didn’t hear the competitors ahead of me. I get asked often if I was nervous. I was very pleasantly surprised before and when I went on stage that I wasn’t nervous at all. I suppose I had been practicing for so long I just felt I was better prepared for this contest than any other contest I had been in before. One of the things that I thought that really helped me was that I had gone around the sports show prior to the contest and everyone I talked to had given me advice and they all gave me so much encouragement that I just felt ready to get on the stage and start calling. It was probably my best calling I had ever given on stage, but to myself I thought I might finish about 6th. All the Junior competitors were back stage sitting together and they called out the top five names and when I heard my name I just jumped up and went out on that stage as fast as I could get there. I was tickled to death that I had finished in the top five at the Grand Nationals.

My next contest is March 6, so there will be a lot more practicing and getting a lot of advice. I practice everyday, if there is any free time or if I’m not doing anything, I just put a call in.

But I was very pleased with the contest, especially when you consider that many of the competitors have been competing for a number of years. So here I was competing at the grand nationals my first year and without a sponsor, it was just amazing.

I am with Knight and Hale Game Calls now and I’m very excited about that. Knight and Hale Game Calls have always been my favorite company. Two years ago when I started calling I used a lot of different calls and the one that worked best for me was a Knight and Hale Mouth Beginner 2-pack. They are a double reed call without any splits. This was before I started competing, but I had a lot of respect for them and the values they believed in. They are a Christian based company and that meant a lot to me. So at the convention I walked around till I got to the Knight and Hale booth and with all these men standing around talking and their pro staff as well as Harold Knight and David Hale, I popped one of their calls in my mouth and started calling. One of the pro staffers was blown away. He said , “You need to get in the contest” I replied that that was why I was in Nashville. He said , “If you finish in the top five, come back and see us!” I met so many of the major names in the industry it would be hard to mention them all , but those who know the different call makers will know their names, like Steve Stoltz. I would have never dreamed that he would have listened to my calling and given me advice.

Andrew is the son of Dan Moore, who is rightfully so very proud of his son. It was Dan who was most nervous during the competition. 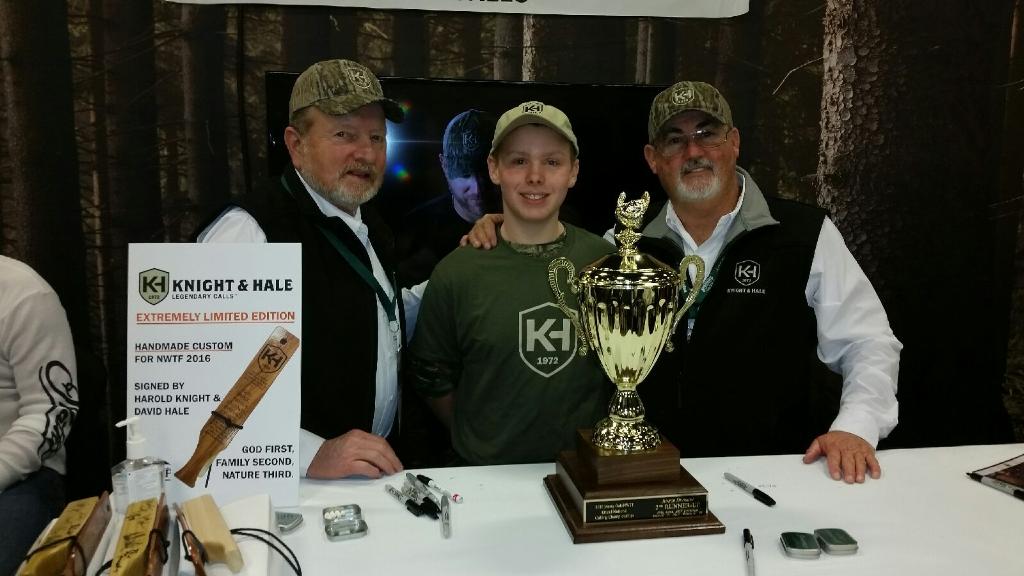 Andrew with his sponsors 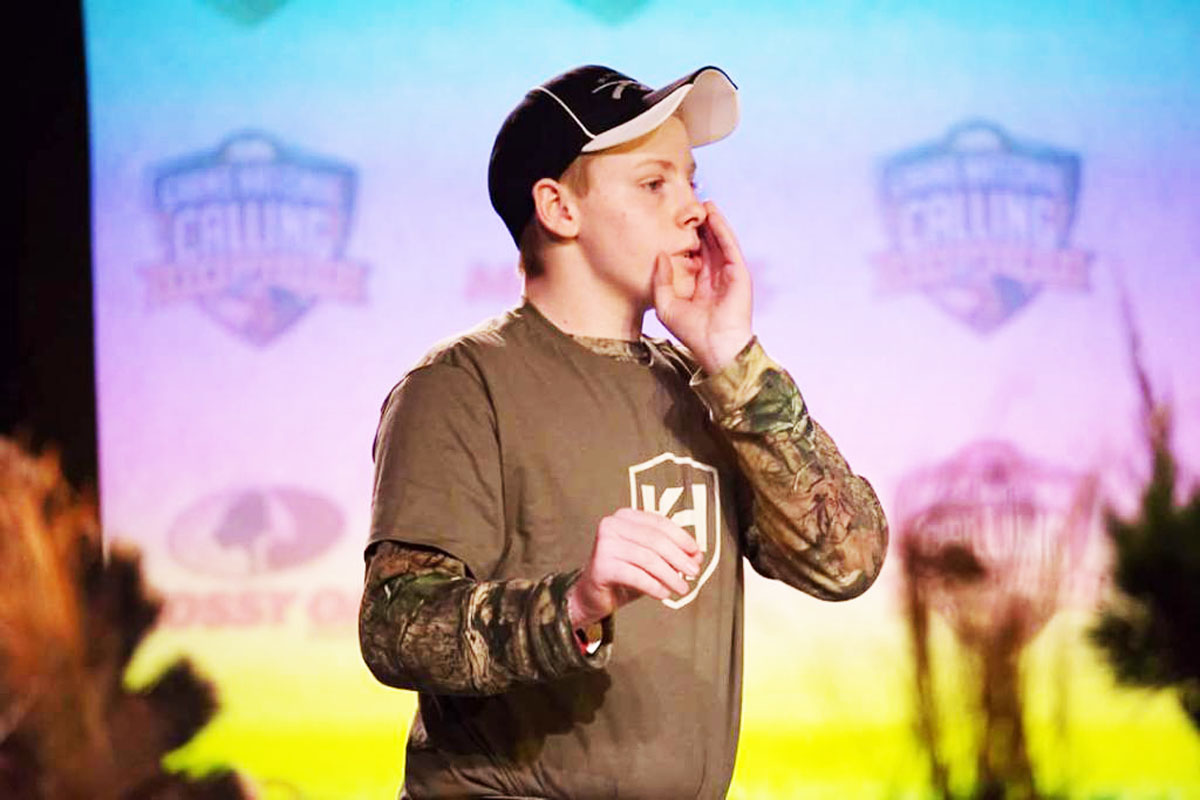