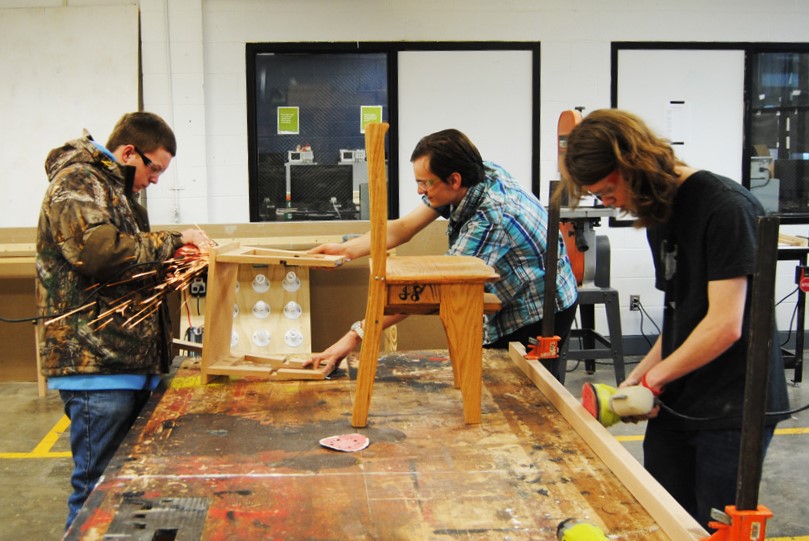 This school year a revival and revamp of several Industrial Technologies classes has been unfolding thanks in large to the KCR-1 School District’s new Industrial Tech teacher Rich Green.

Knox County students have been taking electrical, drafting, woods and metals classes where they have been developing a plethora of skills.

Students are back to building pieces of furniture, wiring and testing electrical currents, welding and drafting designs. Taking it a step further, current and advanced technology is available to them, which adds an edge to bygone era of similar classes most commonly remembered as, “shop class.”

Armed with school issued iPads, access to the internet and design applications, Knox County students are coming up with and assembling surprising and exciting things.

Mr. Green is teaching six classes a day to 41 Knox County High School and 17 Middle School students. He has an extensive history in the field.

“I grew up on a farm three miles west of Memphis and graduated in 1998 from Scotland Co. R-1. After high school I attended Indian Hills Community College in Ottumwa for Machine Technology. After graduating in January of 2000, with an AAS degree in Machine Technology, I took a job at Vermeer Manufacturing in Pella, IA. I worked second shift in plant two where balers, rakes and mowers are made operating two computer numerical control (CNC) lathes and a key seating machine simultaneously,” said Green. “I was hired at the Clow Valve’s machine shop in Oskaloosa, IA. There I operated four CNC lathes and two Fanuc robots.”

Mr. Green graduated from William Penn and worked for All States Manufacturing in Memphis, MO. as a drafting engineer, then went to work for Hopkins Lumber until he was offered the opportunity to start an Industrial Tech program at Knox County R-1 School District.

In the months leading up to the current school year Mr. Green transformed his classrooms into a bona fied Industrial Tech Department.

He spent just about every day of the summer of 2015 at school cleaning, organizing, painting, framing a finishing room, building electrical stations, building a hinged wall between the shops, replacing doors, ordering supplies for classes and more.

Already, Mr. Green has his sights set on the future of the program.

“I am currently filling out a bunch of grants to hopefully secure some funding to purchase tools for the students to use. I would like to add a CNC plasma cutter that students could use to cut up to half-inch thick metal for projects, signs, logos. It would also have the capability to hold a router to cut wood products such as plywood, and, with this option, we could make furniture for the elementary and many, many other things,” said Green. “I would also, in time, like to purchase new bench top CNC lathes, vertical mill and a Fanuc robot to expose Industrial Tech students to industry standards and programming.”

This week the Knox County R-1 School District began giving community presentations about the many new things students at the district are doing in their classrooms. These showcases are planned be on the fourth Thursday of every month through April. The Industrial Tech Department will be one of the features of the showcase.

Anyone interested in attending a KCR-1 Showcase event is asked to call Lacy Hayes in the Superintendent’s Office at 397-2228.