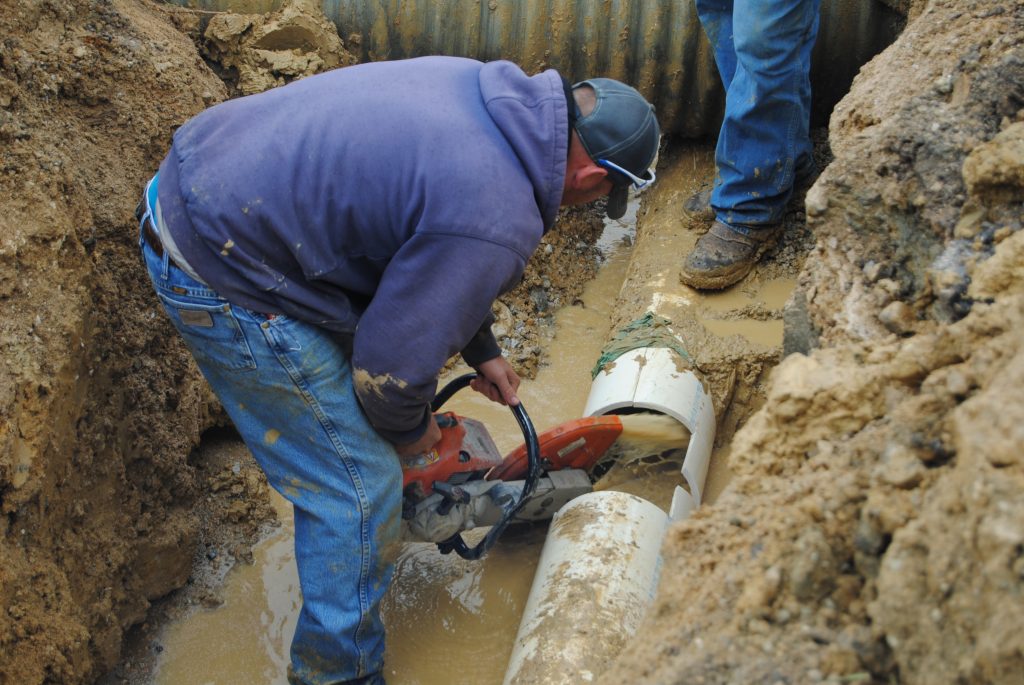 Update: According to a representative of the City of Edina, the earliest the citywide boil order will be lifted is on Wednesday afternoon, May 18, 2016. The broken section of the water main was removed and replaced by the end of the workday on Monday, May 16, 2016.

Water samples have been taken to Kirksville for testing. The results of those tests are expected to be released by Wednesday afternoon.

Click HERE for general information about boil water orders from the Missouri Department of Natural Resources.

Scroll down for original story.

The City of Edina’s Supervisor of Utilities Ty Parrish and Wastewater Treatment Superintendent Mike Wriedt spent Monday morning and afternoon, May 16, 2016 tackling a beast of the project. They were tasked with finding and fixing a break in Edina’s water main.

About 100 yards south of the Edina Ball Field, they dug out the water main, which feeds all of Edina, and found a crack in the main more than ten feet long along the top of the pipe.

Digging out the line and cutting out the damaged section of pipe proved to be a daunting process. They had to navigate around a gas line and a large drainage tube while it was raining.

According to Wriedt, the drainage tube could have been a factor in the break, though, it is unknown what exactly caused it.

The main is expected to be repaired by the late afternoon. Once the repair is complete the entire City of Edina will remain on a 48-hour boil order, which is common in water main breaks.

Boil orders are issued to protect the public from things like bacteria that may enter the water main during a break or subsequent repair.

The water main was shut-off after the break was discovered late Sunday afternoon, May 15, 2016. Reserves in the City of Edina water tower supplied the city during the shut-off and repair of the water main.

This story will be updated with the exact time the line is fixed and the end time of the citywide boil order.