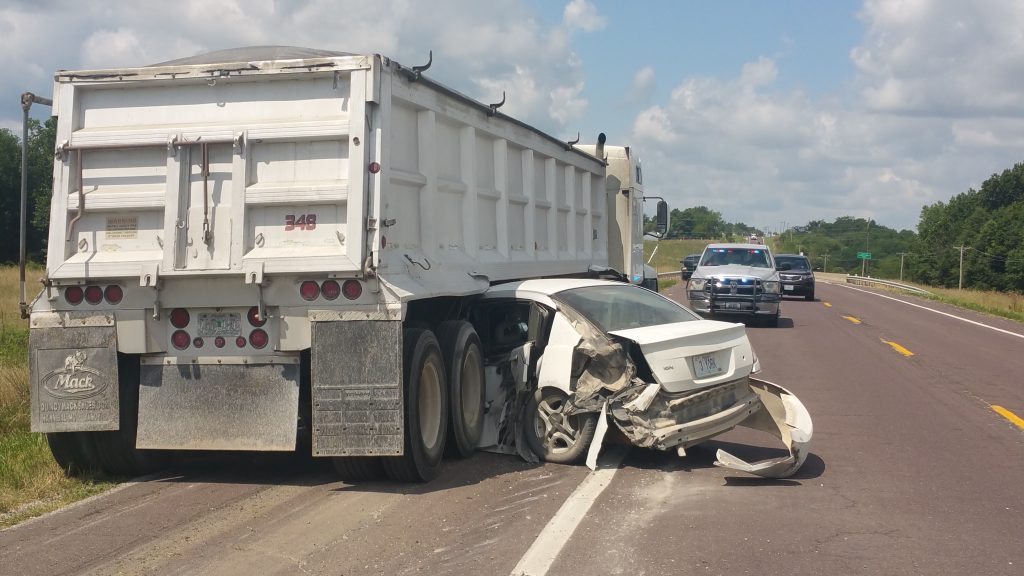 On Thursday, at approximately 11:30 a.m. a collision occurred at the intersection of Highway 6 and State Route T (known as Bee Ridge Road) approximately one mile east of Edina, which involved a white four-door Saturn sedan and a tractor trailer carrying a load of sand. 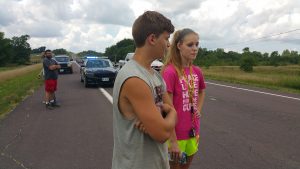 Mark Strange, Shelby York and Marissa York were stunned after the crash. Amazingly, everyone walked away from the crash. Photo by Echo Menges

The driver of the sedan was Shelby York, 15, who is not a licensed driver, but said he does have his drivers permit.

The passenger in the sedan was Marissa York, 18. Both teens live in rural Knox County. They are siblings.

The driver of the tractor trailer was Mark Strange, 27, of Edina.

According to the Yorks, the teens were headed west on Highway 6 and stopped to make a left-hand turn onto State Route T to head south. Strange crested the hill behind them and couldn’t get stopped in time.

Strange, also westbound on the highway, agreed. He didn’t have enough time to stop his rig.

“When it was happening I had to think fast. Either take it into the ditch or try to go around them,” said Strange pointing to the ditch. “I tried to make it around them.” 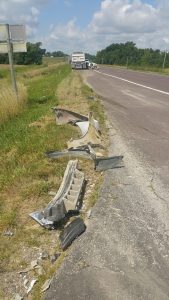 The front bumper of the sedan was ripped off and the vehicle was drug, under the trailer, nearly (an estimated) 70 feet . Photo by Echo Menges

“The front of the trailer clipped the car. We got pushed under the trailer and it started to drag us,” said passenger Marissa York. “I grabbed the gear shift and threw it into reverse, trying to help get us out from under it, but by then his hands and feet were off the wheel and the pedals. We couldn’t do anything.”

“I thought they were dead,” said Strange. “Usually, accidents with these aren’t small ones. I’m just glad everyone’s okay.”

According to the Yorks, both teens were wearing their seat belts.

The eastbound lane of Highway 6 was closed for approximately one hour, until a wrecker could pull the sedan out from underneath of the trailer, and remove it from the scene.

More information about the crash will be released in the August 3, 2016 edition of The Edina Sentinel.