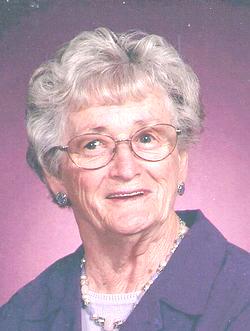 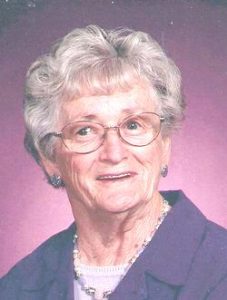 Born on May 25, 1925, in Baker, Montana, Verna was a daughter of Raines and Myrtle Hubbard Wiseman. After the family moved to Missouri, she attended Maywood School. Verna married J.P. Wallace on June 27, 1942 in Ewing, Missouri.  He passed away July 16, 2009.

Together they worked the Wallace family farm near Ewing and raised five children. Verna helped J.P. with farming and with his auction business. She also worked at the Ewing Nutrition Center until she retired. She lovingly cared for her children and grandchildren.

She was a member of the First Baptist Church of Ewing where she faithfully served as a nursery worker for over 30 years and as a deacon’s wife. She was a 50-year member of the Order of Eastern Star.

Visitation will be held Thursday from 4 until 7 p.m. at the First Baptist Church in Ewing.

The family suggests memorials be made to the Gilead Cemetery in care of Ball-Davis Funeral Home, Ewing, Missouri.