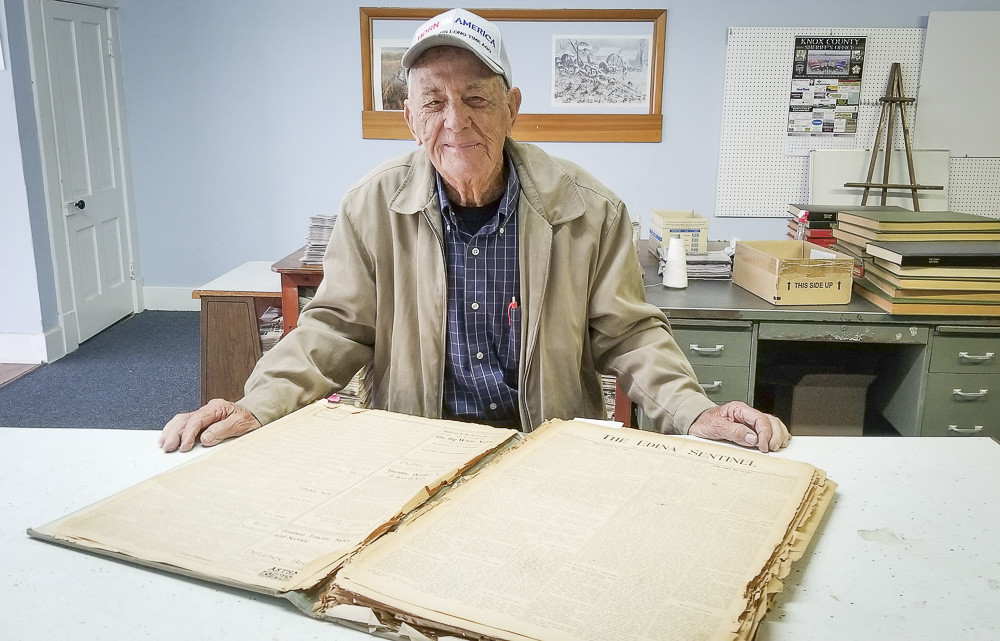 Knox County’s newest  centenarian, Martin Guinn of Colony, has been celebrating his 100th birthday for more than a week. The well-known Northeast Missouri native laughs and jokes with a wide assortment of people who have been showering him with congratulatory and excited greetings everywhere he goes. Over his 100-year journey, he has acquired quite a few friends and witnessed a remarkable amount of changes.

Guinn was born into a world much different than the world we live in today to Orval and Doll (Studenberg) Guinn at the family’s Colony, MO, home. While he was a very young child, his family relied on a horse and buggy or a horse and sled to go places, their home did not have indoor plumbing and life was altogether different.

Guinn grew up in Colony on his family’s farm and attended the Colony School, a three-room school house, from first to tenth grade. He went straight to work on the farm full-time after finishing the tenth grade.

“A lot went on to the high school, some didn’t. At that time, people were needed on the farm,” said Martin Guinn over meatloaf and mashed potatoes during a lunchtime interview at the IDK Cafe in Baring on his birthday, Thursday, October 11, 2018.

Guinn recalls the changes throughout his lifetime. He remembers the family’s first automobile and pickup truck, both of which were acquired in the 1920’s.

“Buggies and horses to cars to airplanes to motorcycles to motorhomes, we’ve had ‘em all,” said Guinn.

He remembers listening to the radio before television had been invented and one of his favorite shows “Amos and Andy”.

“I think everybody liked Amos and Andy back then. It was a pretty popular show. I can’t tell you what year. We had a television about 1948,” said Guinn. “Something like that.”

“We played a lot of cards, too. People would go to other people’s houses and play cards – maybe two or three times a week.”

He also remembers all the changes in the agriculture industry since his childhood.

“Mainly at that time the crops were corn, wheat, oats, cattle, hogs and a lot of Timothy. That was one of our big crops. It was Timothy seeds. At that time, they were used to make dyes. There was a big market for Timothy seeds back then,” said Guinn. “They had tractors when I was born. I’ve always had those around.”

Guinn remembers driving the cattle and hogs ten miles to the railroad station in Rutledge, MO and shipping them to market in Chicago, IL.

In his youth, Guinn didn’t travel much and stayed in the region for the most part but did get to accompany his family’s livestock to market on the train a few times.

“I made three trips to Chicago and that was with cattle. If you had cattle on the train, a half a car load or a full car load or several, it was a free trip. You got to ride the caboose to Chicago. You got to go with your cattle and you got to be with them when they were sold in the stockyard. They went to a commission company and the commission company had to sell them, which doesn’t happen anymore,” said Guinn. “They had long leather couches in the caboose. You could lay down on them and take a nap. One time, when I was a kid probably 15, here’s this couch that runs the length wise of the train and I laid down. The Conductor came by and cracked me on the feet. He said, ‘Wake up sonny. Turn around. If this here car would break lose the brakes would automatically come on – you’d break your neck. I had to turn around and put by feet first. Sounded reasonable,” laughed Guinn. “He called me sonny.”

It’s quite a change from today, where he uses his smart phone to check on the livestock market.

“I smoked at one time, but I was never a dedicated smoker,” said Guinn.

He counts himself lucky to be in such good health.

“You go somewhere and sit down and watch all the people go by. You figure out how lucky you are.” said Guinn.

“I eat breakfast every morning. I like bacon, eggs and toast, but I don’t eat it every morning,” said Guinn. “As you get older nothing is as good as when you were younger.”

Guinn joked about the names of meals.

Guinn continues to live in Colony less than one mile from the place he was born. He also goes to Florida every winter, which is a tradition he has continued for 40 years.
On Sunday, October 7, over 200 people attended his birthday party at the Colony Community Center.

His advice for living well is: “Just take it one day at a time.”

Happy Birthday Mr. Guinn, from everyone at The Edina Sentinel!

This story was featured in the October 17, 2018 edition of The Edina Sentinel.