Baring, Missouri – According to Knox County Sheriff Robert Becker two young boys, 18-months-old and three-years-old, have been found deceased inside a burned out home in Baring, Missouri.

Emergency responders were called to 509 Frazier Street at approximately 4:30 a.m.

They arrived to find the home fully engulfed by flames.

According to the Sheriff, the home was occupied by the Coon Family, a family of seven including three adults, a mother, father and grandmother, and four young children.

Five of the family members and one pet was able to get out of the home. Two children and another pet were not.

A Baring Volunteer Firefighter is shown trying to lure a kitten from the burnt remains of the home. The cat, believed to have been an inside cat, had singed fur and her whiskers were singed off during the fire. Another animal inside the home did not survive. Photo by Echo Menges

According to a witness at the scene, loud pops and screaming woke the neighborhood. Several neighbors came out of their homes to try to assist, but the fire was too intense to go inside to look for the missing children. 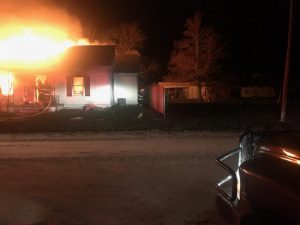 This photo was taken by Baring Volunteer Fire Chief Richard Witherow at 4:30 a.m. The blaze was too intense to allow firefighters to safely enter the home. Photo courtesy of The Edina Sentinel 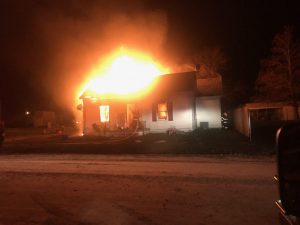 This photo was taken by Baring Volunteer Fire Chief Richard Witherow after he arrived on the scene of the Baring House Fire on Tuesday morning, November 20, 2018. Photo courtesy of The Edina Sentinel

This wood burning stove in the center of this photo is believed to be the cause of the tragic house fire in Baring, MO on Tuesday morning, November 20, 2018. Photo by Echo Menges

The surviving members of the family have been taken to a nearby hospital by a Knox County Ambulance, according to a neighbor. The extent of any injuries suffered by the survivors is unknown at this time. 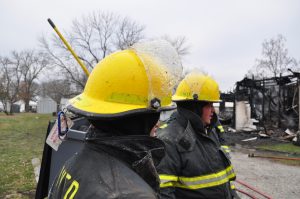 Baring Volunteer Firefighters are shown with frozen droplets of water on the masks of their helmets at the Baring house fire on Tuesday morning, November 20, 2018. Photo by Echo Menges

It was an intense and devastating morning for everyone who responded. The cold morning air partially froze the ground during the fire fight and ice crystals were formed on the equipment of the firefighters who worked diligently and continuously until the missing children were found. 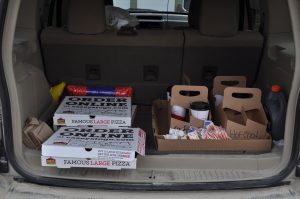 The Manager and an employee of the Casey’s General Store in Edina brought provisions for the cold first responders at the Baring, MO house fire on Tuesday morning, November 20, 2018. Photo by Echo Menges

Some relief was brought in the way of hot chocolate, hot coffee and breakfast foods by the Casey’s General Store in Edina Manager and a Casey’s employee, which was greatly appreciated by emergency personnel who had been on the scene of the fire for hours.

The Coon family has lost everything. Many community members have inquired about how to donate to the family.

The Knox County Salvation Army has opened a bank account at the Citizens Bank in Edina for the Coon Family. Anyone who would like to give a monetary donation to the family can give it to any teller at the bank and let them know the donation should be deposited into the Coon Family Account. Monetary donations may also be left at the Knox County Health Department in Edina today and tomorrow during business hours, until 4:00 p.m. each day. The phone number for the KCHD is (660)397-3396.

The Knox County Bright Futures organization is also in the process of determining ways to provide assistance to the family.

This story will be updated when new information is available.