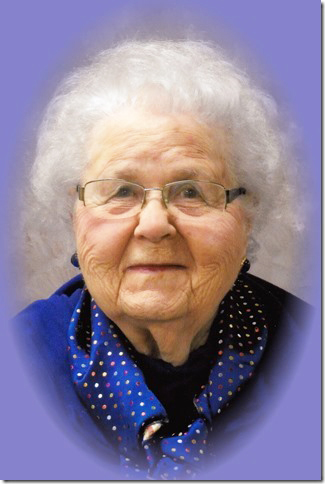 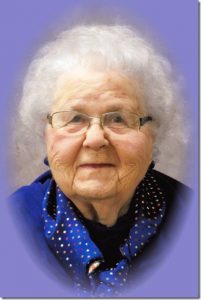 Lavola Pearl Hobson, age 95, of Kahoka, MO, passed away Tuesday, December 11, 2018 at the Clark Co. Nursing Home in Kahoka.
Lavola was the daughter and first born of William James “Bill” and Myrtie Ethel Hunziker Hodges.  She was born at home on June 25, 1923 near Antioch, MO, where she grew up and helped her family on the farm.
She attended a rural one room school in Antioch and graduated from Kahoka High School in 1941.  She married her high school sweetheart, Leland Bruce Hobson, on December 31, 1940 in Palmyra, MO.  They were married 68 years at the time of Leland’s death.
Lavola lived in the Kahoka area all of her life.  She was a devoted homemaker, mother, wife,  grandmother, great grandmother, and friend to all.
Lavola was a member of the Cedar Grove Baptist Church south of Kahoka for many years where she served as church secretary, pianist, and Sunday school and vacation bible school teacher.  The past several years she was a member of the First Baptist Church of Kahoka where she helped with choir, served as a church hostess, and wherever else she was needed.
She was blessed to be able to stay home and care for her home and family.  She enjoyed putting in a large garden and canning.  She was a former 4-H leader and was an excellent seamstress and loved to crochet.  Cooking large meals for her family and playing card games and board games made her day.  She also loved mowing her large yard.
She leaves behind two daughters, Judy Lorimor of Cedar Rapids, IA and Janis Kelsick and her husband John, of Hillsboro, IA; one son, Jeffrey Hobson of Keokuk, IA; seven grandchildren: Jalene Megchelsen and her husband, Tom, of Marengo, IA, Janese Ott Ceron and her husband, Miguel, of Merida, Mexico; Jelissa Stewart and her husband, Matt, of Wapello, IA, Jason Kelsick and his wife, Stephanie, of Alleman, IA, and Breelyn, Brayden and Bryna Hobson of Keokuk, IA; thirteen great-grandchildren: Thad, Jalise, and Jestine Megchelsen of Marengo, IA, Jacob, Hannah, James and Joseph Stewart of Wapello, IA, Miguel, Gabe and Danika Ceron Ott of Merida, Mexico, and Aidan, Evan and Amelia Kelsick of Alleman, IA; a sister-in-law, Lois Hodges of Lima, OH; niece and nephews, Edith (David) Van Sandt, Mark (Donna) Hodges and David Hodges, all of Lima, OH.
She was preceded in death by her parents; a brother, Devon James Hodges; and a nephew, Allen Hodges.
Funeral services were held Saturday, December 22, 2018 at 11 a.m. at the First Baptist Church in Kahoka  with Pastor Chris Lind,  Pastor Robert Bell and Rev. Dan Deatrick officiating.  Eulogist was Jalene Megchelsen.
Special music was  “Amazing Grace” with vocalist Sheila White, recording “I Can Only Imagine” and congregational hymns “In the Garden” and “I Can Only Imagine”.  Organist was Mrs. Denise Mathes.
Honorary pallbearers were Miguel Ceron Ott, Gabe Ceron Ott, Danika Ceron Ott, James Stewart, Joseph Stewart, Hannah Stewart, Aidan Kelsick, Evan Kelsick, Amelia Kelsick, Breelyn Hobson, and Bryna Hobson.
Pallbearers were Tom Megchelsen, Matt Stewart, Jason Kelsick, Brayden Hobson, Jacob Stewart and Thad Megchelsen.
Burial was in the Kahoka Cemetery.
Friends could register on Friday, December 21, 2018 between the hours of 9 and 5 at Wilson Funeral Home. Family received friends Saturday, December 22, 2018 from 10 a.m. until services at 11 a.m. at the First Baptist Church.
Memorials were suggested to the First Baptist Church or the Clark Co. Nursing Home Activity Fund.
On-line condolences may be expressed at www.wilsonfuneralservice.com.
Posted in AREA OBITUARIES