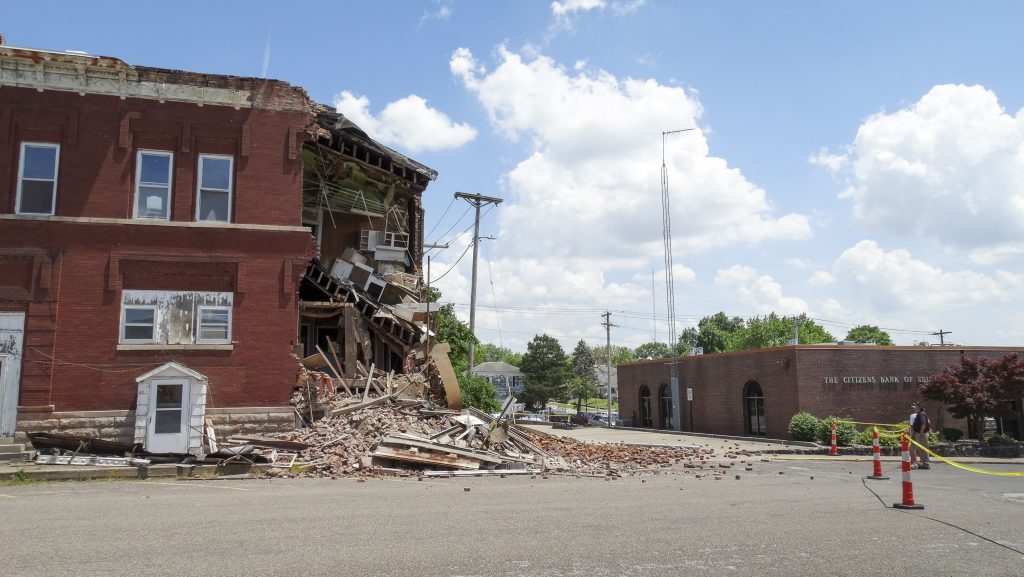 (The short videos below were recorded right after a section of a historic building collapsed on South Main Street in Edina. Scroll down for the story and photos of before and after the partial collapse. Video/Photo Credit: Echo Menges/The Edina Sentinel)

The building was deemed dangerous by Edina Police Chief Ryan Bishop on Wednesday, June 5. The sidewalk and a parking area next to the building was closed to the public.

On Thursday morning, June 6, Chief Bishop closed a section of South Main Street west of the building as a precautionary measure. Only 28-hours later, the southwest corner of the building came crashing down.

This reporter was in the area after taking photos of the building while it was still intact. Just minutes before the southwest corner gave way loose mortar was seen falling from a crack, which was causing a section of the west facing the wall to bulge.

When the collapse occurred, a loud cracking sound was heard and the corner of the brick building fell making a heavy crashing sound, which sent a cloud of dust into the air.

Only two pedestrians were in the area at the time of the partial collapse. The other pedestrian eyewitness was an Edina teenager standing on the corner of South Main and Highway 6.

Debris from the building spilled out onto the street and into the alley between the historic building and the Citizens Bank of Edina.

“The building owner has been contacted. There was already plans to demolish this building and I’m sure this development will speed up those plans. It is the building owner’s responsibility to take care of this. The situation is different from the last partial collapse we had because it affected the highway. This is not preventing people from getting to their destinations. One business is affected,” said EPD Chief Ryan Bishop.

According to the Knox County Recorder’s Office and the Knox County Assessor’s Office, the building is still listed under the name of the late Asa Shaw. Shaw died earlier this year and a new building owner has not been officially recorded in Knox County.

Chief Bishop has been dealing with Shaw’s brother, John Shaw of Quincy, IL. John Shaw was in Edina on Thursday to discuss the dangerous building and began making arrangements to try to have the building torn down, according to Chief Bishop. 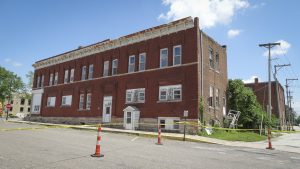 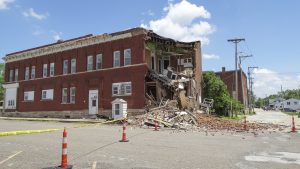