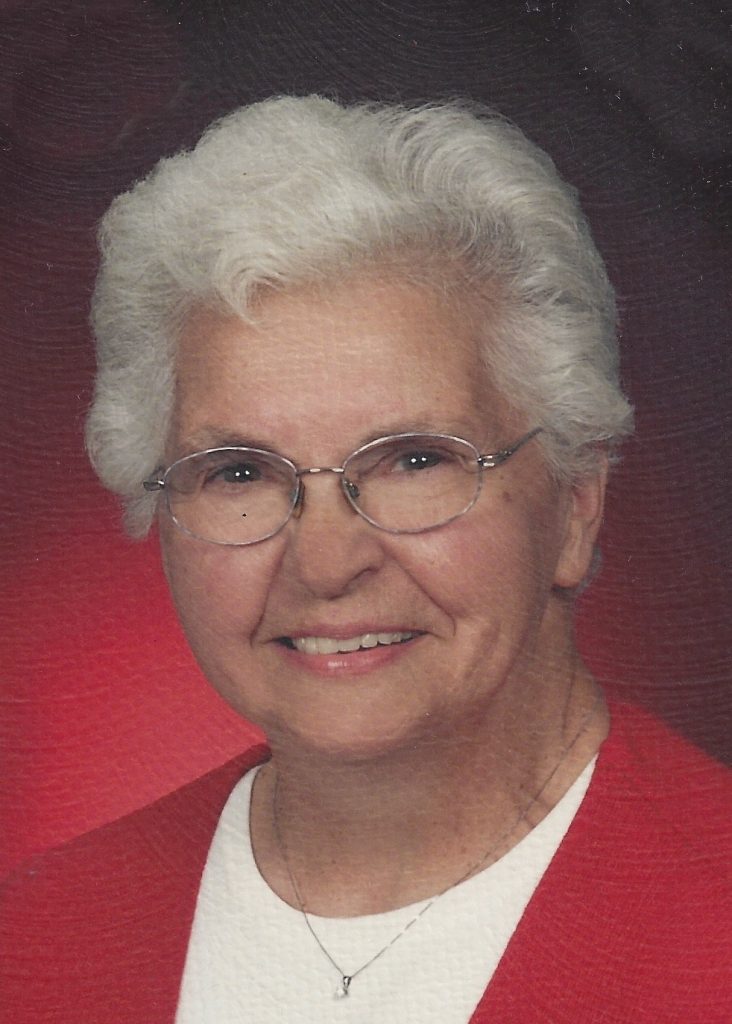 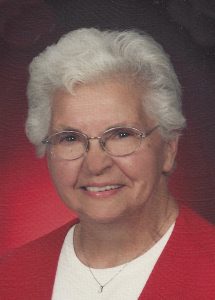 June Olean Ferguson, age 87, of Carroll, IA, went home to be with the Lord on Saturday, October 19, 2019 at St. Anthony Regional Hospital in Carroll surrounded by her family.

Funeral service will be held at 11:00 A.M. on Tuesday, October 21, 2019 at the Church of Christ in Carroll with Rev. Gale Juhl officiating.

Friends may call at the Dahn and Woodhouse Funeral Home in Carroll after 5:00 P.M. on Monday where there will be a prayer service held at 7:00 P.M.

The casket will be moved to the Church of Christ in Carroll at 10:00 A.M. on Tuesday where visitation will resume until the time of service.

Funeral arrangements in Carroll are under the direction of the Dahn and Woodhouse Funeral Home and online condolences may be left for the family at www.dahnandwoodhouse.com

June was born to Joseph A. Steele and Sylva M. (Matheson) Steele in their family home on the farm near Wyaconda, MO.

June graduated as valedictorian from Wyaconda High School at the age of 16.

She then attended Kirksville State Teacher’s College, which enabled her to return to the class room as a teacher at the young age of 17.

On August 12, 1951 her high school sweetheart, Louis David Ferguson, became her lifetime love when they were married in Neeper, MO. To this marriage four children were born: David, Donald, Jackie and Joy.

After their marriage, June and Louis moved to Joplin, MO so that Louis could pursue his education at Ozark Bible College to become a Christian Minister.

June would fondly tell of her years working and their adventures together while Louis was in college and interim preaching in Missouri and Oklahoma.

In the winter of 1956 June and Louis moved to Bagley, IA, where Louis was the preacher for 6 years.

While they never returned to Missouri to live after that, June would always claim the “Show Me State” as her own.

In 1962 June, Louis and by now their two sons moved to Correctionville, IA as Louis became the Pastor there. 1965 brought a new calling to Louis and June as he left the ministry and they moved to Midwest Christian Children’s Home in Peterson, IA.

Louis became the Director and June the Office Manager but their most important titles were “Mom and Dad” to the children they cared for while there.

In 1976 June and Louis moved to Carroll, IA so that they could both could help build the ground work of a home for mentally and physically challenged people, which would become New Hope Village.

June worked in various capacities at New Hope over 25 years, her last being the Volunteer Coordinator.

To this very day both Louis and June have treasured relationships with co-workers that became friends and clients that became family.

In 1985 June and Louis were instrumental in starting the Carroll Church of Christ, where they remain active members.

June was a member of the Carroll Lion’s Club and spent many years participating in SpeakUp! at the Carroll Middle School.

At any moment in time she would be happy to share about the family she was so incredibly proud of.

God’s work through Louis and June’s hands and hearts will truly be her legacy.

So many people loved and were touched by June in her 87 well lived years.

Be assured, she loved every one of you in return.

When she reached heaven’s gate, June was undoubtedly was greeted with, “Well done, good and faithful servant! You have been faithful with a few things; I will put you in charge of many things. Come and share your Master’s happiness!”  Mathew 25:23, NIV

June was preceded in death by her parents, Joseph and Sylva Steele; her father-in-law Chester Ferguson; her mother-in-law Sylva Ferguson; a sister Norma Jean Scifres; a brother-in-law Virgil Scifres; a sister-in-law Calene Steele; and two grandsons Phillip Brodnax and Andrew Ferguson.
We would like to express a heart felt thank you to Dr. Ervelli and his staff for treating June and our family with the utmost respect and extraordinary care.  A special thank you to the Nurses, CNA’s, and Staff at St. Anthony Hospital, Nursing Home and Hospice for the amazing care June received. We also extend our gratitude to Dahn & Woodhouse Funeral Home for their stellar service.