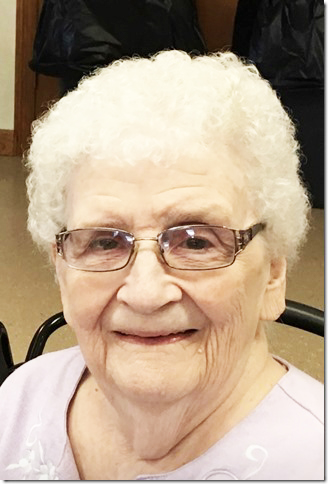 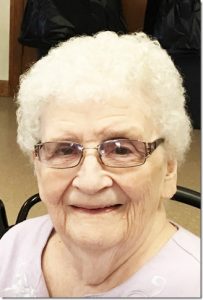 Beverly was born October 1, 1933, in Macomb Illinois, a daughter of J. Bryan and Ethel M. Benstein Parrish of Edina, MO.

She married Robert E. Ballinger and later married Loren E. Rahn who preceded her in death on July 18, 2014.

Between them they were blessed with eight children.

Beverly graduated from Quincy High School and from Blessing School of Nursing.

Even in her last days, she was still trying to care for the residents at her care facility.

Bev and Loren were active members of the community when they lived in Kahoka.

They were faithful members of the Kahoka Christian Church where she taught Sunday School.

They were active members of the Clark County Food Pantry.

She loved doing crafts, crocheting, knitting, doing ceramics and pottery for family and friends, and play a mean game of dice, specifically, zilch.

Special music was “Amazing Grace” recorded by Nancy Ballinger, “In the Garden” by Dan McAfee soloist, and recordings “There Was Jesus” and “Go Rest High”.

Burial was in the Oak Grove Cemetery at Golden Point, IL.

Visitation was held on Saturday from 9 a.m. until 10 a.m. service at Wilson Funeral Home.

Memorials in lieu of flowers may be made to the family with checks made payable to Nancy Ballinger.