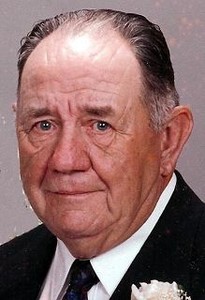 He was born February 11, 1924, near Knox City, Missouri the son of Enos Grant and Elzora Galbrecht Edwards.

On April 21, 1945, at Knox City, Missouri he was united in marriage to Helen Ilene Anderson.

Mr. Edwards was preceded in death by his parents, one brother Harley Glennon Edwards and one sister in infancy.

Elvin was a graduate of the Knox City High School.  He served his country in the United States Army from May 11, 1945 to April 22, 1946 and received the World War II victory medal.

Funeral services were held Monday, June 18, 2007 at 11:30 a.m. at the Hudson-Rimer Funeral Home in Edina, Missouri.  The Reverend Dewayne Wellborn officiated the services.  Burial with full military rites was in the Millport Cemetery conducted by Knox City American Legion Post # 358.

Expressions of sympathy in memory of Elvin Ray Edwards may be made to the Millport Cemetery or the American Diabetes Association.  Memorials may be left at or mailed to Hudson-Rimer Funeral Home, P.O. Box 1, Edina, Missouri, 63537.   E-mail condolences may be sent to hrimer@marktwain.net