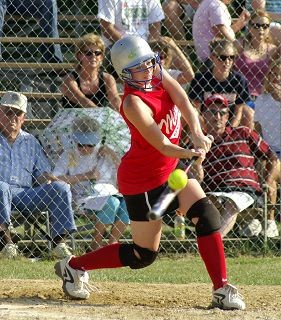 Illinois took advantage of porous Missouri defense, scoring single tallies in the fifth and sixth innings of the Fourth Annual Illinois vs. Missouri KHQA Senior Softball Salute, held July 8 at Quincy. Illinois won the first half of a twin bill by a 5-3 score.

The Missouri all-stars rode a five strikeout outing by Highland HS product Jodie Schultz to a 5-4 victory in the nightcap. Mark Twain HS grad Terri Christal made two sparking catches in left field and had the game winning hit with two outs in the bottom of the seventh inning.

Both teams had runners all over the bases in the first game. Missouri failed to back up three time Class 1 all-stater Kelsey Resa’s six strikeout complete game pitching performance fumbling their way to five errors on the night. Illinois did not fare much better with seven unofficial fielding errors.

Terri Christal plated Palmyra HS product Kristen Scholl with an RBI hit for a one to zero lead in the top of the third inning. Illinois took advantage of three Missouri errors and put four runs on the board during the bottom of the fifth inning.

Natalie Bertucci (Warsaw-Nauvoo HS) stroked a key two RBI double for a 4-1 Illinois edge after five frames. The game deciding rally started with two out and no one on base.

Highland’s Stephanie Schultz drew a one out walk in the sixth and scored on an error, pulling Missouri within a 4-2 deficit. Brooklyn McCulloch (Quincy Notre Dame HS) slammed a two out RBI triple in the bottom of the sixth. Kristen Scholl threw out McCulloch attempting to stretch the hit into an inside the park homer for the final out.

Missouri mounted a rally from the 5-2 hole during the top of the seventh inning. Jodie Schultz put the ball in play and earned an RBI on a bases loaded ground out. Winning hurler Emily Miller (Quincy Notre Dame HS) fanned Columbia College bound Stephanie Schultz with the tying runs on second and third base, ending the first game with Illinois on top of a 5-3 final score.

Illinois had five runs on eight hits and seven unofficial errors. Brooklyn McCulloch and Amanda Smith were 2-3 at bat with a run scored apiece.

Missouri had a 3-5-5 line score in game one.  Jacee Ellis of Bowling Green HS had two Missouri hits. Highland HS first baseman Stephanie Jones had a sixth inning hit for Missouri, who left eight runners on base.

Two time all-stater Jodie Schultz stroked a two run double; breaking the ice for a 2-0 Missouri lead in the bottom of the third inning in the second game. Jodie Schultz kept the Illinois team off balance with a nice assortment of off-speed offerings.

Highland’s all Clarence Cannon Conference outfielder Ashley Stice played second base for a shorthanded Missouri team in the second game.

Mark Twain HS products Jessica Davis and Terri Crystal took advantage of a pair of Illinois errors and scored Missouri runs in the fourth inning for a four run lead. Stephanie Jones (Highland HS) had a Missouri hit during the fourth frame.

Illinois pulled within a pair with two scores in the top of the fifth inning. Jami Roskamp (Warsaw-Nauvoo HS) lit the fuse with a leadoff triple. Brooklyn McCulloch had an RBI single for Illinois. Terri Crystal saved a run with a over the shoulder running catch of Kaleena Hummel’s fly ball in left field to end the inning.

“(Illinois) hit the ball aggressively, and took advantage of our errors,” commented Mark Twain HS head coach Brooke Hudson on the first game. “They hit, and we didn’t. I thought that was the difference in the game. We left too many runners on base. These are all stars. They are hand picked for a reason. When you put runners on, you have to get them home.”

“There were runners on base when Terri (Christal) made those catches,” said coach Hudson of her 2007 graduate left fielder. “The catches no doubt saved as many as four runs on the board.” Christal doubled with one out in the Missouri sixth inning, but was stranded on third base with no scoring.

Terri Christal snared another fly ball in the Illinois sixth with two runners in scoring position for the second out. Kelly Gronewald of Unity HS knocked in the third Illinois run with a two out single, trimming the Missouri lead to 4-3 midway thru inning six.

Quincy High School product Graceann Schmitt led off the top of the seventh inning with a single. Brooklyn McCulloch sacrificed the runner to second base.

Kaleena Hummel belted an RBI hit, tying the game at four. Illinois had runners on first and second base with one out. Jacee Ellis entered the game at second base in the sixth inning and pulled off a double play, ending the Illinois scoring threat.

Stephanie Schultz led off the Missouri seventh inning with a base hit off Carthage HS product Breezy Guyman. Jodie Schultz drew a walk. Mark Twain HS product Jessi Stuart bunted the runners to second and third base with one out.

Mark Twain’s Jessica Davis walked to load the bases. Jacee Ellis grounded out to third with Amy Brinkman (Payson HS) keeping the game going with a throw home for the second out.

Terri Christal went 2-4 at bat with a Missouri run scored and the game winning RBI. Stephanie Schultz was 2-3 with a run scored for the West siders. Missouri scored five runs on seven hits and three errors stranding ten.

“They caught us off guard in the first game,” said Jodie Schultz. “I thought our defense was pretty horrible in the first game. It was not that great in the second game. Terri Christal saved my (tail) so many times. She was awesome. In my opinion she is the MVP of the (Missouri) team.”

Retired Highland HS mentor Dianne TenEyck was the Missouri assistant coach. Paul Littleton of Unity HS was the Illinois head coach. “It was great having Coach TenEyck and my teammates there one more time,” said Jodie Schultz.