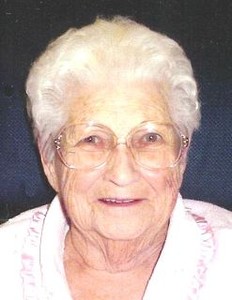 Rosie Lee Gross, of Steffenville, Missouri, went home to be with her Lord and Savior Jesus Christ, Thursday, July 19, 2007, in the LaBelle Manor Care Center, LaBelle, Missouri, at 89 years of age.

She was the daughter of Zack and Eva Powell Carter, born June 25, 1918, in Shelby County, Missouri.

Rosie Lee Carter and John M. Gross Sr. were united in marriage by John’s brother, Paul A. Gross, in the home of the bridegroom, in Steffenville, Missouri, on June 27, 1936.  John Sr. preceded Rosie Lee in death on January 28, 1982.

She was employed by the Telephone Exchange, Boudreau’s Store and the Post Office, all in Steffenville, and Davis Cleaver, Quincy Speaker and Paper Box Factories in Quincy, Illinois.

Rosie Lee and John lived most of their married life in Steffenville.  She lived in the same house for 65 years.  She was a master of gardening, having canned the beautiful produce from her garden for her family to enjoy in the long winter months.  Sewing, homemaking, cooking, and baking, most especially baking angel food cakes, were some of the things that Rosie Lee enjoyed.

Expressions of sympathy may be made in memory of Rosie Lee Gross to the Steffenville Cemetery, Durham Baptist Church or the LaBelle Manor Care Center, in care of Coder Chapel, P.O. Box 151, LaBelle, Missouri 63447.