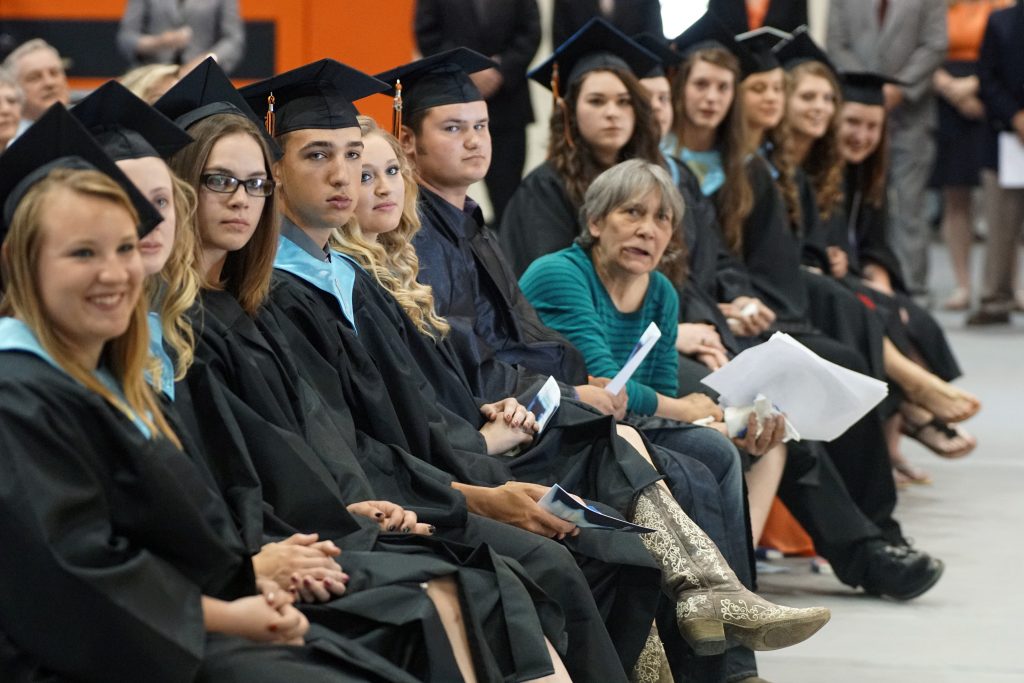 “This class is not only a class of friends, but a class of family,” Adair County R-II Superintendent of Schools Mrs. Shelly Shipman said opening the May 17, 2015 Commencement Ceremony held at the High School Gym.

Nine of the 12 seniors received Diplomas of Distinction. Five Brashear High School grads were named Honor Students for maintaining an 11-point GPA or above.

Chance Hill was named Brashear High School Class of 2015 Valedictorian. Allison Thompson was tabbed as the Class Salutatorian. Both Hill and Thompson were awarded their diplomas by one of their parents.

Board of Education President Traci Hill presented Diplomas to graduates, among them her son Chance. Roger Thompson presented his daughter Allison her High School Diploma.

Cathy March has been selected four consecutive years to speak at graduation.

The long time district employee and food service worker said “It’s not just me who is going to miss you,” Cathy March said.

“From Kindergarten to graduation when you walk out of here today, all you will have left is your memories.”

Faculty members talked about the Class of 2015 being in the top ten in communication and Math in the state of Missouri as third graders. “This is a leadership class,” Shelly Shipman said.

Cathy March talked about the respect Brashear’s five to seven man boy’s basketball team received from opposing administrators and coaches “on how hard you played, even though you might have been behind by 30 points.”

Brashear’s 0-12 spring baseball team fought a talented 11 win LaPlata team on their home field to a 5-2 defeat in their final 2015 game at the District Tournament.

Some of the scholarships mentioned from the podium included Chance Hill receiving the Truman State University Leadership Award or what amounts to a full ride academic scholarship to the Kirksville University.

All twelve Brashear Class of 2015 graduates announced plans to continue their education in college or vocational school.

Senior Ali Garrett listed playing on Brashear’s only District Champion softball team in 2011 as a freshman as one of her greatest High School memories.