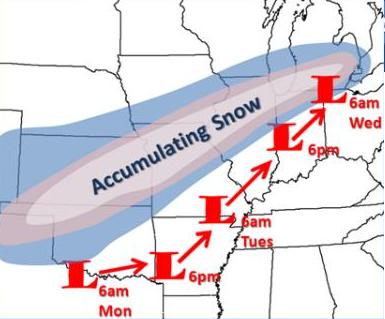 And for the following counties in Illinois: ADAMS and BROWN.

“We’re prepared. We have additional resources something for the northern part of the county because it’s not going to be a statewide storm like the last one,” said Missouri Department of Transportation representative Marisa Ellison. “A lot of the schools are already anticipating closures. Since we know it’s coming we’re more prepared. Today’s the day to get your groceries. Tomorrow will not be a good travel day. Hopefully with drivers there were some lessons learned with the last one. If you don’t have to go anywhere stay off the road.”

UPDATE: All court proceedings at the Knox County Courthouse on Tuesday, February 26, 2013, have been continued to March 12, 2013.

Click here to be linked to MoDOT’s Traveler Information Page.

Click here to be linked to the National Weather Service’s Forecast Information.