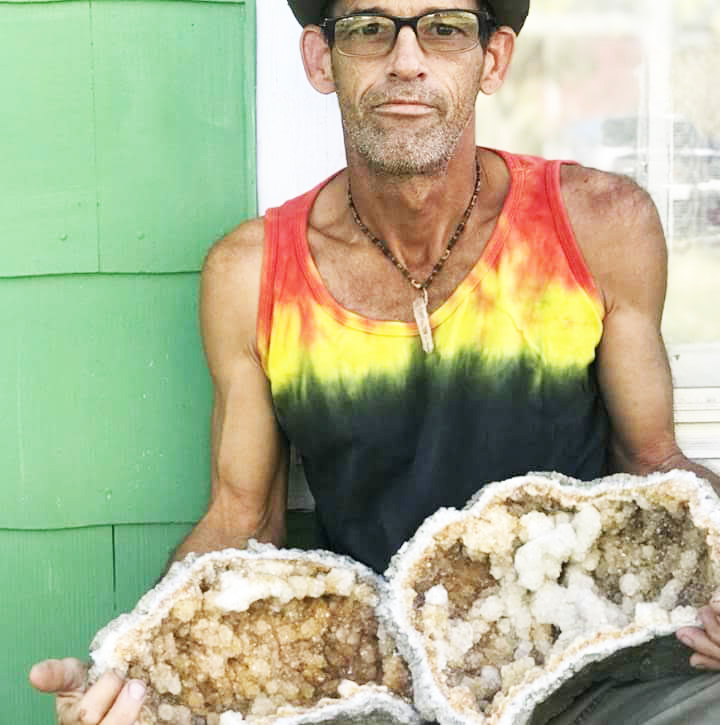 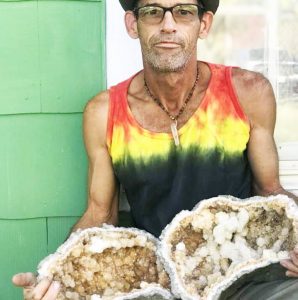 Do we really know everyone who lives inside of our hometown?  Do we really pay attention to everything that people do?   It can be interesting to run into someone living in your home town that you did not even know was there and find out what they do for a living.  And when you discover someone who does something that is very interesting, which not a lot of people do, that also allows families the opportunity to do something together, does not require a lot of money, does not use electricity, and which also includes the outdoors and exercise–it seems priceless.

He explained to us that these geodes were considered to be rare due to the color inside of the geode, and still proceeded to give them to us even though they were worth money.  It made my kids and I really happy to see these beautiful geodes and how they sparkled in the sun.

After that chance encounter, I decided to interview “Rockhound Rob”, Rob Young.  He lives here in Kahoka.  He is a promoter of Geodefest, and he collects geodes and sells them for a living. He is the guide at the Borrow Pit in Canton, Mo.  He said that he was, “Dubbed best guide ever, last year”.

Rob has been collecting Geodes for the last ten years.  He travels to Chicago, St. Louis, and Wisconsin to sell geodes at flea markets and festivals.

“I have a passion for the outdoors, and I find myself at peace while I am out collecting”, he said

I asked him how he got started into rock collecting, and he answered, “I had got introduced two a couple of collectors.  My mom took us rock hunting as a kid.  At ten years old, my mom worked at cleaning the Derosear Fossil Museum, and she would take me there, and there was this person named Doug, who saw how interested I was into the fossils.  He offered to take me to Quincy to a rock and mineral show and paid for everything for me and he bought me a Trilobite fossil, and this was a big inspiration for me to get started into rockhounding.  Now, I sell him rare geodes for his collection”.

“I collect one or two times a week, I prepare geodes by cracking them and cleaning them, I go to an event somewhere every weekend, and I sell the geodes locally and in different states,” he said.

“I take small geodes or other rocks and if sometimes a parent cannot afford a geode or rock, I give the kids something to inspire them and the smile that I get, is worth more than any geode I could sell”, he said.

As we continued to talk, he told me that, “he has a goal of inspiring at least one child a year into taking in rockhounding instead of playing on electronics, it gets them interested into the outdoors and gets them exercise and fresh air”.

Speaking with him I found out that the biggest local event that he has been a part of is Geodefest which takes place in Hamilton, Ill., at Chaney Creek Boat Access.  He told me that, “Geodefest is a big rock event I look forward to every year, it is a big family-oriented event with contests for adults and children.  There are many vendors with rocks and jewelry, I will be set-up mid-way down on the left side at Geofest if anyone should want to come see me.  This takes place the last weekend in Sept., Friday, Saturday, and Sunday”.  Another thing that he had said was, “if one would want to go into the mines and do the tours that one needs to pre-register with Keokuk Tourism Bureau or to just show up at the event”.

One thing that “Rockhound Rob” wants everyone to remember is “It is very important to always ask for permission before collecting or going to geode mines, and there are places to go around here, once you have permission and made appointments, such as with Randy Alvis, in the St. Francisville Mine, Sheffler’s Mine which is south of Wayland, or Jacob’s Mine which is in Hamilton, Ill”.

If you would like to see what “Rockhound Rob” can do and what he does with Geodefest he said, “you can watch the following videos at the different web addresses.”

This is what he does and how he does it, he is with Bryan Majors, “The Crystal Collector”, thank you for letting us watch the video, Bryan Majors- https://youtu.be/Si0itwkalxE

This is how “Rockhound Rob” helps people and takes part in Geodefest, which is a big rock event, Geodefest 2018. – Here Bryan Majors, “The Crystal Collector”, has made this video at Geodefest, thank you again, Bryan Majors, https://youtu.be/kiGObqQHw7I

If you should want information on Geodefest, you can get to this information by going to the web address: http://www.geodefest.org/. 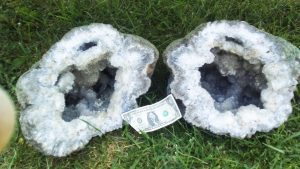