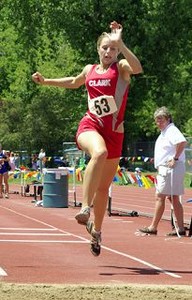 Clark County senior Courtney Shuman stretched for her third preliminary triple jump attempt as the opening ceremonies of the MSHSAA Class 1-2 Track Championships were going on. A recent Olympic theme was playing on the Dwight T. Reed Stadium sound system.

Courtney Shuman exploded off the board and into history, breaking a 24 year old state record and at the same time winning her second consecutive Class 2 girls’ triple jump state championship. Courtney Shuman won the Class 2 girls’ long jump title traveling 17’6” on day one of the May 18-19, 2007 state track meet at Jefferson City.

Clark County’s two gold medals propelled the Lady Indians to a 12th overall finish in the Class 2 team standings with 20 points. Clark County’s boys placed tied with Cole Camp for 54th overall. Dominic Egley took a nasty spill over the final 300 meter hurdle, but got up off the deck and won a medal, finishing eighth in the finals with a time of 47.68 seconds.

Dominic Egley qualified seventh in the preliminary round with a time of 41.82 seconds. The Indians did not have a lot of luck this time at Jefferson City.

The Indian’s tough luck continued when senior Calem Lipper wound up ninth at 46’11 &frac34;”, one spot away from a Class 2 boys’ shot put medal. Putnam County senior David Fowler was tenth overall at 45’5”.

The Cougars took seventh place medals in the boys’ 4×100 meter dash. Highland repeated their eighth place boys’ team finish from a year ago.

Putnam County sophomore Katie Evans was first in the Class 2 girls’ discus and second in the shot put.

Knox County senior Morgan Nunan won a sixth place medal in the high jump, and was part of the 4×200 relay for her 2007 second state medal.

“I was stressed out when I first came,” said Clark County’s now three time state track and field champion. “I was afraid I wouldn’t do very (well). I started getting my 17’s going. That was a real confidence booster. With the running, and the crowd cheering that really helped me a lot,” said Courtney Shuman of her long jump gold medal.

“My goal is to get two wins in the long and triple,” said Courtney Shuman. Clark County’s second 2007 state track gold medal was won during the first competition of the second day. The Class 2 girls’ long jump was also an 11AM event.

The defending Class 2 girls’ triple jump champion established her dominance over the field early on, traveling 36 feet even during the preliminary round.

Jumps and throws during field event preliminary rounds count toward the final standings. Most of the elite Class 2 girls’ triple jumpers were traveling around the 31 to 33 foot mark on Saturday, May 19, 2007.

Field events are held during the opening ceremonies. If an athlete chooses to march around the track, they can come back and finish their field event without penalty.

A large group of athletes were marching on the track backstretch near the triple jump pit as Courtney Shuman prepared for what would prove to be an unmatched feat by a Missouri high school Class 2 girls’ triple jumper.

“I never imagined I would break the record,” said Courtney Shuman after receiving her third, and final MSHSAA Class 2 track and field gold medal. “It’s been a great four years. It was kind of sad, but I know that I broke the state record,” commented Shuman in response to a question about moving on to the college level.

Courtney Shuman talked about the record breaking 37’11 &frac14;” triple jump. “I don’t know how that happened. When they were walking around the track and playing the music, that really pumped me up. It just came out of nowhere. My last jump in the finals was probably further, but I scratched. I’m still satisfied.”